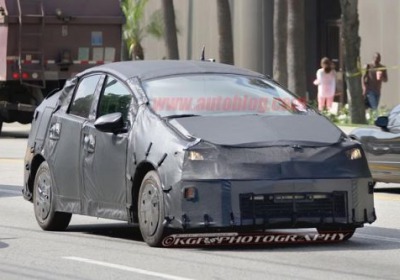 Toyota has built itself into the industry's standard-bearer when it comes to hybrids, and it isn't going to let the poster child for gas-electric vehicles get stale on the market. These spy shots captured in California are our first good look at the next-generation Prius, which could come to market wearing a 2015 model year designation.

Even though it looks like Toyota may have blown its annual camouflage budget on this mule, we can clearly see that it will have the same iconic half-moon design that has been with the car since 2003. If so, this goes against reports from last year that suggested the car would be getting a different look inspired by the 2013 NS4 Concept. Although, this could also indicate that the Prius family will continue to grow – adding a new sedan – to the existing Prius C, Prius V and Prius Plug-In lineup.

These spy shots also give us an indication as to what the interior will look like, with a more stylish three-spoke steering wheel and an instrument panel design that sort of reminds us of a BMW. On the other hand, all the tape, cobbled together pieces and lack of space for a center stack display screen has us thinking this isn't what the final product will resemble.

As for what will be powering the 2015 Prius, we hear that updated versions of the current electric system and engine will be employed, but it will carry over the nickel metal hydride batteries found in today's model. Still no word on the rumored possibility of all-wheel-drive system, either. In addition to a new design and updated powertrain, it sounds like production of the next-generation Prius could be making a move to the US, joining the line at Toyota's Tupelo, MS plant.