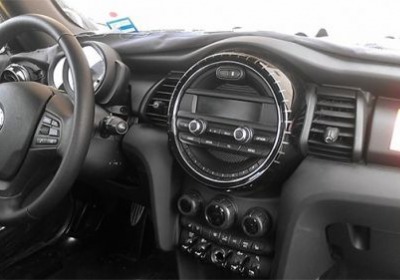 A Reddit user has posted images of the 2015 F56 Mini Cooper, one each of the exterior and interior. As has been the case since the launch of the new Mini in 2001, the overall exterior shape underneath camouflage screams Mini, but insiders are still calling the coming F56 model "the most aggressively different new Mini yet." Inside, though, the two-door that defined premium hatchbacks has, according to its most devoted buyers, gone mainstream.

The giant ring atop the center console is there, but there's no longer a speedometer inside of it. Instead, in an integration that brings to mind words like "shoehorned," Mini designers have placed radio and telephone controls inside the bezel. According to the Mini experts at MotoringFile, the picture above is the base trim and one of four possible treatments – in the upper trims a larger screen for navigation takes up most of the space. The bezel itself is marked with mood lighting that supposedly "swirls around" when you start the car with the red toggle switch.

The speedo rests atop the steering column with a tachometer placed to its left. The BMW wheel pictured is just for the prototype – you can expect a familiar three-spoke Mini wheel when the car is revealed, and latest rumor is that the event will take place at this year's Frankfurt Motor Show.