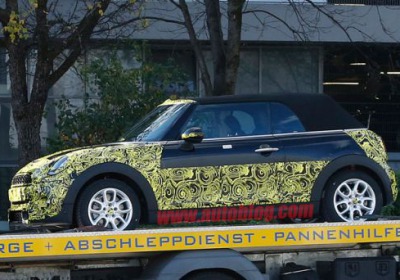 Mini is well underway testing the third-generation of its four-place Cooper Convertible, as evidenced by these photos, showing the new droptop riding along on a flatbed.

Codenamed the F57 - as opposed to the "F56" designation for the Hardtop - the Convertible will ride on the same UKL front-drive architecture that will underpin its hardtop brother, not to mention its German cousins, the BMW 1 Series GT and X1. According to our spies, it'll share more than a few of the BMW i's lightweight technologies and will include such advanced features as electronically adjustable dampers. That seems like some high-dollar tech for a droptop Mini, but we'd be quite happy to see it arrive all the same.

From the beltline down, we can expect the Convertible to feature almost identical styling to the Hardtop. Based on the spy photos, there's not a lot to see above the belt line, either. The roof carries roughly the same shape, and will probably fold in a similar Z-pattern to the current canvas top.

Underhood, the Convertible should share its powertrains with the Hatchback, meaning the top-flight mill will be a 2.0-liter, turbocharged four-cylinder with 189 horsepower and 207 pound-feet of torque. A turbocharged, 1.5-liter three-pot will be the standard engine, but should still come to play with 134 horsepower and 162 pound-feet of torque. While the F56 Mini will debut in a few weeks time, we'll be waiting much longer to see the F57 Convertible, with our spy claiming an on-sale date in 2015. Based on that, a Geneva debut seems like a long-shot, although the 2014 Paris or Los Angeles shows seem like possibilities.