New Peugeot 308 looks to be a big improvement 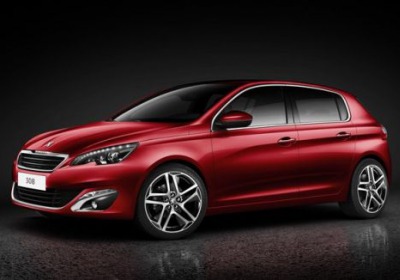 As much as we applaud automakers for flexing their design muscles every now and then, we occasionally find ourselves raising our eyebrows at the "new family design language" that companies smatter across their products. For example: Have a look at pretty much everything Peugeot has put out in recent years. Funky stuff, to be sure, but not always the sort of vehicles that garner adjectives like "pretty" or "sleek." And the old 308 hatchback was perhaps one of the company's worst offenders.

But that changes, right now. Peugeot has taken the wraps off of the new 308 hatch, and from what we can see in these high-res images, it's decidedly better looking. The design follows in the footsteps of the recently launched 2008 crossover, boasting cleaner lines without that huge, gaping maw up front. Instead, there are slimmer, LED-capped headlamps and pronounced foglamps, topped off with a rakish hood. Strong body lines flow from front to back, where there's a clean rump and a thick, windowless C-pillar. Large, split-five-spoke wheels round out all four corners.

Peugeot has not released any technical data about this 308 just yet, only saying that the new generation is a full (and appropriate) 308 pounds lighter than its predecessor, thanks to the company's new modular EMP2 platform. Inside, the reworked interior features premium materials and a rather interesting design, with a 9.7-inch touchscreen interface in the center stack and an instrument panel that's set high on top of the dashboard. Pretty cool.

The 308 makes its official debut at the Frankfurt Motor Show in September. For now, have a good glance at the much, much better-looking hatch in our gallery above, and be sure to glance below for all of the details in Pug's press blast.

A striking and contemporary design

With its compact length of 4.25 metres and well-balanced proportions, the New Peugeot 308 projects a classy and sophisticated presence. The front is dominated by an evolutionary reinterpretation of the brand's 'floating' front grille, and by the strong lighting signature. Slim full-LED headlamps are standard on the majority of trim levels and a world-first in the segment. The high quality of design continues at the rear, with the three Peugeot (lion) 'claws' drawn by the rear LED lamps.

A refined and high-technology interior

"When inside the car, one discovers a world of refined style, completely original in the world of hatchback cars, with a cockpit that is intense, innovative and intuitive; it is the Peugeot i-cockpit," says Vincent Devos, New 308 Product Manager, Peugeot.

Peugeot's design and engineering teams have developed the interior of the New 308 around the concept of the i-cockpit. Everything is arranged for an experience that is intuitive, relaxing the driver to focus entirely on the road ahead. The compact steering wheel and head-up instrument layout mean that information can be clearly read easily and safely, looking over rather than through the wheel.

The highlight of the New 308's generously spaced cabin is the 9.7-inch touch-screen interface, which removes much of the need for physical buttons and switches. Setting a new size standard for the class, it brings together many of the infotainment controls in one place, for ease of use and to create a contemporary and uncluttered cabin.

Advanced new modular platform for an outstanding driving experience
"On the road, driving pleasure is enhanced by the new EMP2 modular platform. With its considerable reduction in weight, it contributes to the dynamism and easy handling of the New Peugeot 308," says Laurent Declerck, New 308 Project Director, Peugeot.

The driving experience of the New Peugeot 308 draws on the brand's expertise in suspension and steering, and takes them to a new high due to the benefits of the new EMP2 platform.

Development of this new PSA Group architecture has resulted in 116 patent applications and contributes towards the vehicle's excellent dynamic qualities. It also plays a key role in the car's considerable weight reduction, by an average of 140kg compared to the current generation Peugeot 308.

Breakthrough engineering has allowed many of the vehicle's major units to be reduced in size – also cutting overall weight – leading to significant reductions in CO2 emissions. As a result, this new Peugeot 308 establishes an environmental benchmark, with one model offering CO2 emissions as low as 85g/km.

Outstanding quality from bumper to bumper

The New Peugeot 308 is the latest evidence of the brand's move up-market. It's an initiative started several years ago and seen most recently with the 208 and 2008. The initial design brief of the New 308 had the highest levels of quality at its core. This ambition has guided the designers and engineers from the very start of the project.

Every element, both inside and outside, has been developed and refined with exceptional attention to detail. The choice of high quality interior materials and the satin chrome or gloss black detailing add to the feeling of sophistication and maturity in the car's design and assembly. The New Peugeot 308 will be built at the Sochaux plant in France. The Trémery and Douvrin sites will supply all of the power units.

The New Peugeot 308 will make its world premiere at the Frankfurt Motor Show on 10th September 2013, when more information about this innovative new model will be released. Sales will start shortly afterwards in mainland Europe and from January 2014 in the UK.