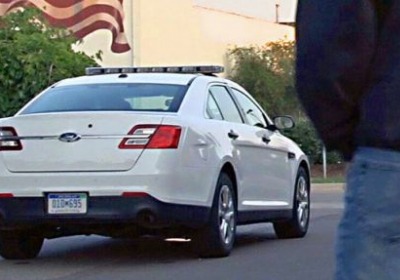 It was only a matter of time before law enforcement agencies would realize the potential of driver-assist technology for use in their Ford Police Interceptors, and, now that they have, those back-up cameras and radar systems won't be used just for parking, but for security, as well.

The surveillance mode system works when the camera or radar detects movement from behind the vehicle, and if it does when it's activated, an alarm will alert the officer inside the car, the driver's side window will roll up and the doors will lock, protecting the officer from an unwanted intrusion. The officer, of course, has the option to turn surveillance mode off, mainly in urban areas where pedestrians would constantly set the alarm off, and it can only be activated when the police car is in park.

Randy Freiburger, Ford's police and ambulance fleet supervisor, came up with the patent-pending idea when researching the needs of police officers and riding along with them, during which time he realized officers would be safer with an extra set of eyes watching the area behind their cars, especially at night or when they're completing paperwork, using the in-car computer or handling a radar gun. "Unfortunately, there are people with bad intentions who sneak up on police officers," he says.

Ford and Intermotive Inc. are developing the surveillance mode system together, and it can be installed at Crown, the facility near Ford's plant in Chicago where police car accessories are installed, or it can be upfitted locally by working directly with Intermotive. We're glad police officers have an extra layer of protection courtesy of everyday automobile technologies - it's a rough world out there! Scroll down to glean more details in the press release.

- Using existing driver-assist technologies to detect a person approaching Ford Police Interceptor from behind, the system automatically sounds a chime, rolls up the driver's side window and locks all doors


DEARBORN, Mich., July 19, 2013 – A new technology available for Ford Police Interceptor will provide an additional measure of security for law enforcement officers by mitigating their risk of being snuck up on from the rear while working in their vehicles, especially at night.

When an officer activates the system with the vehicle in park, the backup camera, combined with sensors that detect blind spots and parking obstacles, continually monitors the area to the rear of the vehicle. Surveillance mode can be turned off in situations such as curbside urban settings where pedestrians would constantly set the alarm off.

The patent-pending idea is the brainchild of Randy Freiburger, Ford police and ambulance fleet supervisor. Freiburger spent many hours riding along with police officers and saw firsthand the dangers officers face in the course of routine patrols and investigations.

"I can tell you from personal experience at night that officer security is a critical concern," says Freiburger. "Unfortunately, there are people with bad intentions who sneak up on police officers. This system builds upon the Ford Police Interceptor DNA that puts safety and security at the top of the list."

Officers have to write reports, monitor an in-car computer or radar gun, and perform other tasks while sitting in their vehicle. Surveillance mode gives them an extra set of eyes to help guard against threats – especially at night when visibility is compromised.

Ford collaborated with Intermotive Inc. of Auburn, Calif., which developed and will sell the surveillance mode system along with several other innovative law enforcement products. The system can be installed at Crown, the facility near Ford's Chicago Assembly Plant where lights and other accessories are added, or at local upfitters by working directly with Intermotive.

Surveillance mode is available for the 2014 Ford Police Interceptor sedan and utility vehicle.