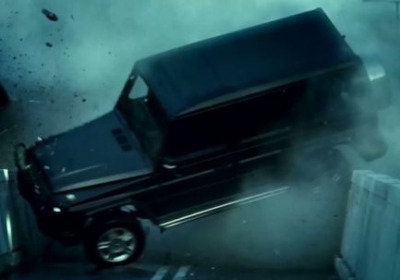 It would seem the act of dying hard brings with it lots of wanton destruction of the four-wheeled kind. According to John Moore, director of A Good Day To Die Hard, starring Bruce Willis, There were 132 (cars) that could never be used again. Another 518 required a lot of work. And damn right there were some good cars there... That's the fun of it."

"With Die Hard it's about how audacious the action is," says Moore. "So you have to drive over a Lamborghini. An actual one. And yes it hurts me. I'm a car fanatic." Yeah. Sounds like it hurt really bad... though not as bad as the final tally after all the carnage had been counted: "Someone showed me the numbers on the car chase and soup to nuts, you put it all together it was like an $11 million sequence."

Interestingly enough, that $11 million tally didn't include a "several" Mercedes-Benz G-Class SUVs. According to Moore, the German automaker provided G wagons at no cost for filming, and, of course, all of them were wrecked. Proof of such can be seen by watching the video, provided by Mercedes itself, below.