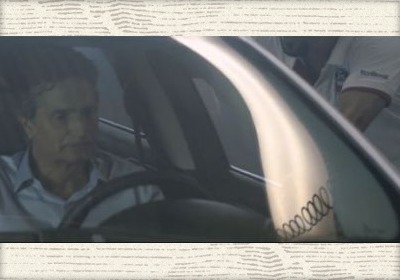 Formula One World Champions Nelson Piquet and Nigel Mansell haven't been on good terms since the 1986 season, when Piquet joined Mansell at the Williams team and Piquet spent the year privately fuming about not being granted the status of number one driver. Things only got worse from there – even though Piquet won the title the following year with Williams, still partnered with Mansell, the fuming was a lot less private.

They're back together after a 25-year silence, in the city of Porto Alegre, Brazil to drive the new Ford Fusion. Called "Fusion Grand Prix," both men get the new Ford sedan, prepped to their liking – but still street legal, we assume – for a race to decide... well, who is faster behind the wheel of a Fusion.

There will be four episodes, with the first two having already aired. The third episode comes on January 29 and the race happens February 5. You'll find two video episodes and a press release below, but note – because it's a campaign for Ford Brazil, Piquet's dialogue in the vids isn't translated, so hit the Closed Captioning button to hear his side of the smack talking.

SÃO BERNARDO DO CAMPO, Brazil, Jan-21-2013 12:00 AM ET - As part of the New Fusion pre-launch efforts, Ford will relive one of the greatest rivalries in the history of Formula 1, with former world champions Nigel Mansell and Nelson Piquet racing a pair of Fusions. The campaign will air starting on Jan. 15 on www.ford.com.br/fusiongp.

The online "Fusion Grand Prix" campaign will have four episodes and highlights the stars' reunion 20 years after they left Formula 1. The campaign's first three episodes will air live on Jan. 15, 22 and 29, showing the drivers preparing for the race and the car's features. The finale, with the clash of rivals, will be aired starting on Feb. 5.

The "A New Legend is Born" campaign was specially designed for the Fusion's launch to convey how the car is a game-changer in its class and unites sportiness and sophistication. The Fusion Grand Prix campaign aims to highlight the car's features and create a connection with the audience that witnessed Piquet and Mansell's rivalry on and off the track.

Episodes
Mansell, 1992 World Champion, visited Brazil in December 2012 for the video shoot with Piquet, the first Brazilian driver to win three Formula 1 championships (in 1981, 1983 and 1987). The legendary rivals were reunited in the Brazilian city of Porto Alegre for the video shoot after nearly 25 years without any contact. They tested and drove the New Fusion as if it were an official race. During the shoot, it was clear that both respect each other as professionals, but remain rivals at the wheel.

"This opportunity to relive one of the greatest rivalries on the tracks was something unique. It's the kind of idea that the car deserves and was a long-awaited tribute. The best thing was that they really had fun with the event and the spirit of competitiveness was still alive," says Fábio Brandão, Creative Director at JWT, the agency responsible for the campaign.