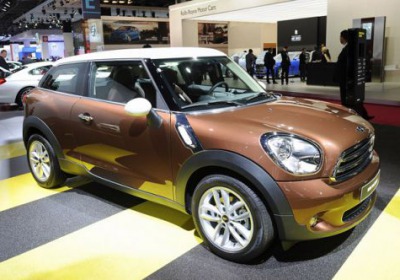 It seems that retailers are bringing out the Christmas decorations earlier each year, but Mini's premature holiday spirit could be one for the record books. The day after Black Friday, the "Mini Goes to Santa Claus" adventure will depart from BMW headquarters in Munich, Germany and head up Rovaniemi, Finland (just outside the Arctic Circle) to deliver Christmas letters to Santa Claus –he must have an mail outpost here for his North Pole workshop. Guinness World Records is also getting involved with this trek, by competing for a for the longest-ever wish list to Santa.

Mini has assembled teams of vehicles from 16 countries consisting of all of its current models to drive the almost 1,900 miles. Although it won't be a part of the convoy, the Mini Paceman will be in Rovaniemi to welcome the groups along with former rally driver Rauno Aaltonen who will "demonstrate his unequalled talent" while driving the Paceman. We're not exactly sure what this means, but snowy climates and rally drivers always seem to be a recipe for great entertainment to us.

Scroll down for Mini's press release, but we'll have to wait until later in the month to see what should be some pretty cool pictures of the trip.

MINI GOES TO SANTA CLAUS.
THE MINI FAMILY WILL BE OFF TO THE ARCTIC CIRCLE TO VISIT SANTA CLAUS AND MAKE A RECORD-SETTING DELIVERY.

Woodcliff Lake, NJ – November 6, 2012... MINI presents "MINI Goes to Santa Claus", an international project that perfectly embodies its unconventional nature, and for the first time, it will be competing for the Official Guinness World Records challenge.

MINI and Guinness World Records.
A convoy of MINIs will be travelling to Rovaniemi located at the Arctic Circle to bring Santa Claus Christmas letters written by children and adults from all over the world. At the same time, MINI will be competing for the Official Guinness World Records attempt by trying to assemble the longest wish list to Santa Claus. In order to set this world record, MINI has involved a total of 16 markets, spanning enough countries to amaze even Santa Claus himself, who certainly knows a lot about world tours.

The EU markets participating in this project are Germany, Italy, the United Kingdom, Portugal, Belgium, Bulgaria, Greece, Poland, Slovenia, the Czech Republic, Hungary, Romania and Slovakia. Outside Europe, Russia, the United States of America and Singapore will be joining the event.

On the road to the Arctic Circle.
On Saturday 24th November, the MINI family will leave BMW Group Headquarters in Munich and drive "one way" to Rovaniemi. The journey will cover more than 3000 km, passing through some of the most beautiful European cities such as Copenhagen and Stockholm.

The MINI family.
The MINIs participating in this road trip are the MINI Clubman with its typically generous cargo capacity, the MINI Countryman with its excellent off-road qualities, the MINI Hatchback, the master of go-kart feeling, the MINI Coupe with its superior driving dynamics, the MINI Roadster for maximum driving fun and the MINI Cabrio, which offers that genuine topless experience.

MINI in the US
MINI is an independent brand of the BMW Group. In the United States, MINI USA operates as a business unit of BMW of North America, LLC, located in Woodcliff Lake, New Jersey and includes the marketing and sales organizations for the MINI brand. The MINI USA sales organization is represented in the U.S. through a network of 115 MINI passenger car dealers in 38 states. MINI USA began selling vehicles in the U.S. in 2002 with the introduction of the MINI Cooper and MINI Cooper S Hardtops. Since then, the MINI Brand in the U.S. has grown to encompass a model range of six unique vehicles.