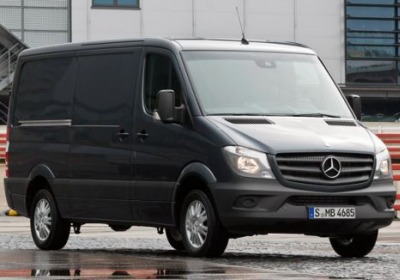 By the end of this year, the Mercedes-Benz Sprinter will be the second-oldest nameplate in its segment here in the States, but with hot new competition waiting in the wings, Mercedes-Benz is giving its hauler a freshened look and more equipment to stave off rivals. The Sprinter was a pioneer in bringing Euro-style delivery vans to North America, and it's inspired others to transplant their Continental offerings, with the all-new Ford Transit and Ram Promaster models launching shortly. It will also continue to do battle with lower-cost traditional competitors like the Chevrolet Express and Ford E-Series.

The big Sprinter will thus get a new look to go with more safety features and available technology. While the information released here technically covers the Euro-spec 2013 Sprinter (which goes on sale in September), the US market is expected to get the new Sprinter for the 2014 model year with many of the same features. Some of this new technology includes a Crosswind Assist feature as standard equipment and the availability of Collision Prevention Assist and Blind Spot Assist as optional safety measures – Mercedes-Benz says that all three are firsts for any van in the world. Also added to the updated Sprinter is a new 1.8-liter supercharged gasoline (or CNG) engine producing 156 horsepower, which will complement the line of diesel engines that carry over and help make the Sprinter the first cargo van to meet the upcoming Euro VI emissions standards. Additionally, a lower ride height is said to improve fuel economy and should improve handling while aiding ingress and egress for both people and cargo.

In terms of styling, the Sprinter's new face also looks more like the current line of Mercedes-Benz passenger cars. This includes a more upright grille along with changes to the hood, headlights and bumper that lend it a closer kinship to models like the CLS-Class and the updated E-Class. The Sprinter will offer both halogen and HID headlights, while the latter will get LED running lamps and offer Highbeam Assist. The images shown here only reveal the exterior from front angles, but it looks like few, if any, changes have been made to the rear of the van. Interior upgrades include a thicker steering wheel, a new shift lever and the latest in audio, navigation and entertainment systems. Scroll down for the official press release for the new Mercedes-Benz Sprinter.

The Mercedes-Benz Sprinter has lent its name to an entire vehicle segment and is a synonym for large vans with around 3.5 tons of GVW all around the globe. The Sprinter has always driven innovations in its segment - a tradition that is being continued by the new model. The new Sprinter continues to set standards, boasting five new safety systems, engines that meet the future Euro VI emissions standard, and a striking appearance. Most importantly, however, the van's excellent low fuel consumption (down to 6.3 liters per 100 km) makes it by far the most efficient vehicle in its segment.

World premiere of new safety systems
The Sprinter has always been a pioneer with regard to driver assistance systems. Five new assistance systems - including several van firsts - will help reduce the number of accidents even further in the new Sprinter.

The following systems are celebrating their world debut in the Sprinter: Crosswind Assist, which is fitted as standard, and COLLISION PREVENTION ASSIST and Blind Spot Assist, which are both optional. Other new features are Highbeam Assist and Lane Keeping Assist. The developers at Mercedes-Benz are convinced that these electronic assistants will play a key role in helping to reduce accidents in the van sector.

As one of the functions of the Electronic Stability Program, Crosswind Assist will be part of the vehicle's range of standard equipment. Customers will be able to order the other assistance systems as individual options or as components of logically assembled packages. This allows every customer to tailor the Sprinter to its specific area of application.
In addition, Mercedes-Benz has improved the Sprinter's handling even further. The lowering of the chassis has improved the van's drag and fuel consumption and makes it easier to load and unload cargo.

The performance of the diesel engines has remained unchanged, encompassing four- and six-cylinder units with outputs ranging from 70 kW (95 hp) to 140 kW (190 hp).
The developers have used the additional exhaust treatment stage to optimize the injection and combustion processes as well as the boost pressure. The results are lower fuel consumption and less combustion noise. The engineers also adjusted the drive system and the ancillary components to enhance fuel efficiency. This applies to the transmission and the rear axle as well as an intelligent generator management system.

As an alternative to the diesel engines, the Mercedes-Benz Sprinter is also available with a Euro VI compliant supercharged four-cylinder gasoline engine featuring direct injection. The engine generates 115 kW (156 hp) from a total displacement of 1.8 liters. The engine is also available in a natural gas variant with the same performance.

Power is transmitted either by the ECO-Gear six-speed manual transmission or the 7G-TRONIC PLUS seven-speed automatic transmission with lock-up clutch, which is the only system of its kind to be found in a van.

Most economical van in its class
The combination of the highly efficient diesel engines, the optimized powertrain, the longer axle ratio, the ancillary components, and the BlueEFFICIENCY PLUS efficiency package has reduced fuel consumption to a minimum of 6.3 l/100 km (NEDC combined), which is a record value for the Sprinter segment. However, the new Sprinter is extremely economical not only as a result of its high fuel efficiency, but also because it comes with the ASSYST maintenance calculation system as standard in Europe. Thanks to this system, the van's maintenance intervals, which were already long, have been extended to up to 60,000 km.

Enhanced exterior and interior
The new Sprinter's appearance has also been substantially enhanced and made more striking. In line with Mercedes-Benz' current design, the van's radiator grille is now more vertical and confident. The grille's three slats are perforated and wedge-shaped. Not only does this change create a more dynamic impression, it also increases the airflow. In addition, a frame surrounds the brand's distinctive radiator grille, making it more prominent.

Another change involves the headlights, which are now more angular. The covers on the reflector housings are particularly striking, dividing the headlights into separate segments. The new hood is higher and the more distinctly shaped bumpers have finely worked lower edges similar to those found on SUVs. The new Sprinter is immediately recognizable from the rear, due to its double-segmented taillights.

The widely acknowledged exemplary interior has also been further enhanced. Comfort has been boosted by the new upholstery and seat coverings, the thicker steering wheel makes gripping easier, and the fresh air nozzles boast chrome applications if the customer opts for a multifunctional steering wheel. The knob of the gearshift lever has been redesigned as well.
The Sprinter is also fitted with a new-generation radio system that equips the van not only with state-of-the-art electronic entertainment features and Bluetooth telephone equipment (including a telephone keypad and phonebook), but also the Becker MAP PILOT navigation system.

Millions of kilometers of testing; orders can be placed beginning in June
The developers of the new Sprinter made sure that the van was thoroughly tested. More than eight million kilometers of endurance testing and extensive customer trials in everyday use had fully demonstrated the new Sprinter's high quality by the time series production was launched.
Customers can order the new Mercedes-Benz Sprinter beginning in June 2013; deliveries will commence in September.