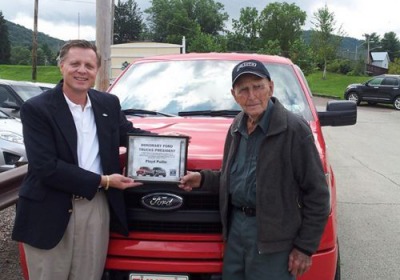 When we talk about trucks we often talk about how loyal truck owners are; it's men like Floyd Pullin who provide the proof. The 102-year-old man from Confluence, Pennsylvania has only owned Ford products since the 1920s, and he's done so well by Ford Trucks that the division named him honorary president for a day, not long after he took delivery of his latest ride, a 2013 F-150 STX.

That's the 16th Ford he's owned. If he bought his first when he was 16, he'd have flipped into a new car or truck about every five years. For 86 years. Not a bad run of business for either side.

Ford Trucks made a video to wish Pullin a happy birthday, which was celebrated at his local Ford dealership and was visited by a Pennsylvania state senator. You can watch it below.

Ford would like to introduce Floyd Pullin of Confluence, Pa. The sprightly 102-year-old is possibly Ford's most loyal customer, having been an exclusive Ford owner since the 1920s – back when Henry Ford was running the company. Floyd recently took delivery of his 16th Ford vehicle, a brand-new 2013 F-150 STX.

To thank him for his loyalty and help celebrate a birthday he won't forget, Ford has named Floyd honorary Ford Trucks president for a day. At a special party held at Thurby Riverside Ford in Confluence today, Floyd's family and friends gathered to help him mark the occasion, which included a special happy birthday video from the men and women of the Ford Trucks team.

Pennsylvania state senator Rich Kasunic was on hand with an official Birthday Celebration Proclamation from the Pennsylvania Senate.