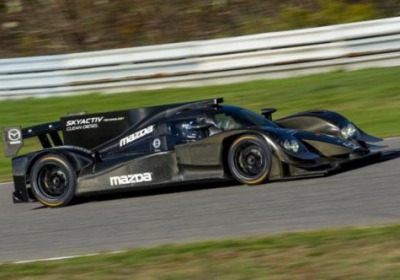 Mazda has unveiled its latest challenger in the top flight of endurance racing, a diesel-powered prototype that will campaign the inaugural, 2014 Tudor United SportsCar Championship. The new Skyactiv-D-powered car will make its race debut at January's Rolex 24 at Daytona.

"This is the most significant step Mazda has taken towards returning to the global racing stage since our overall victory at Le Mans in 1991," said the director of Mazda Motorsports, John Doonan. That historic racecar, the rotary-powered 787B, has grown to become one of Mazda's many, well-known racers.

More recently, the Japanese brand has been making waves in the Grand-Am series, campaigning RX-8s and, most recently, running diesel-powered Mazda6 sedans in the GX-class. Mazda will campaign two factory-backed prototypes at Daytona. Driver lineups will be announced closer to race day.

Take a look below for a press release from Mazda on its latest racing effort.

IRVINE, Calif., Nov. 14, 2013 /PRNewswire/ -- At Mazda, "Never Stop Challenging" isn't just a catchphrase, it's a company maxim. After nearly two years of planning, Mazda Motorsports will field a pair of factory-backed SKYACTIV-D Smart Diesel-powered racecars in the top Prototype Class for the 2014 TUDOR United SportsCar Championship (USCC), beginning with the Rolex 24 at Daytona on January 25-26, 2014. This is a major step up for Mazda, having won the 2013 Grand-Am GX Manufacturers Championship. Mazda will be challenging for overall race wins against the toughest sports car competitors in North America.

"This is the most significant step Mazda has taken towards returning to the global racing stage since our overall victory at Le Mans in 1991," said John Doonan, director of Mazda Motorsports. "And thanks to our SKYACTIV-D Mazda6 racecars winning nine of 12 Rolex GRAND-AM GX races and the GRAND-AM GX Manufacturers Championship this year, we're confident that our two prototype cars will challenge the best North America has to offer."

Long-time racing partner SpeedSource Race Engineering, the team that oversaw Mazda's GX-class championship in 2013, will carry responsibility to develop and run the cars on track. Additionally, Mazda also is in discussions with customer teams interested in the prototype class, as well as teams interested in developing the championship winning Mazda6 into a GT Daytona class car.

Sylvain Tremblay, Owner, SpeedSource Engineering noted; "As a racer, you always want to be in the fastest class. The development of the Mazda SKYACTIV-D was a great deal of work by Mazda and SpeedSource and it will be quite the task to take this to the front of the prototype class in only our second year of competition. Mazda and SpeedSource will have a busy November and December of testing as we prepare for Daytona."

As part of its challenger frame of mind, Mazda is the only OEM racing with a diesel engine. The SKYACTIV-D Smart Diesel race engine is a true production-based engine and a carry-over from the development work done with the Mazda6 GX-class racing cars. The engine is 51 percent stock by parts count, and 63 percent stock by weight. Mazda chose this path as it is the most honest way to demonstrate the performance, quality, durability, and reliability of Mazda powerplants.

Driver line-ups and team partners will be announced at a later date. The cars will make their first public appearance at the "Roar Before the 24" test at Daytona, January 3-5, 2014.

About Mazda, Mazda Motorsports, and MAZDASPEED
Mazda is the number-one brand for road-racers across North America among both club racers and professionals. Thousands of Mazda powered grassroots racers compete in various classes with the SCCA and NASA highlighted by Spec Miata, the world's largest spec class with over 2,500 cars built. In 2006 Mazda Motorsports established the MAZDASPEED Motorsports Development Ladder to assist racers in moving up through the ranks. In 2010 this was expanded to include the Mazda Road to Indy. Key to Mazda's success is strategic partnerships with the Skip Barber Racing School and Mazda Raceway Laguna Seca.

Mazda Motorsports is managed by Mazda North American Operations (MNAO). MNAO is headquartered in Irvine, Calif., and oversees the sales, marketing, parts and customer service support of Mazda vehicles in the United States and Mexico through nearly 700 dealers. Operations in Mexico are managed by Mazda Motor de Mexico in Mexico City.