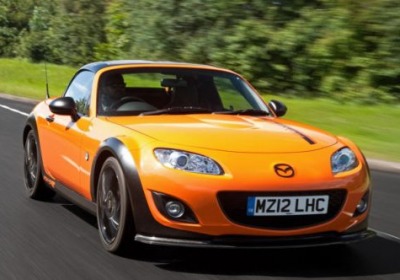 The Mazda MX-5 Miata is as popular around the Autoblog offices as Kate Upton posters are around fraternity houses. Few staffers have much criticism for Mazda's ubiquitous roadster, and fewer still aren't overjoyed when one arrives in their driveway. So you can imagine how a report from Auto Express about a more potent MX-5 model is going over in our offices today.

The new model, which was shown in concept form as the Mazda MX-5 GT at the Goodwood Festival of Speed, has a slight catch, though. First, we have absolutely no idea if Mazda will bring the MX-5 GT to the US. Secondly, and perhaps more problematically, this isn't a production car - it's a kit from the team at Jota Sport.

Now, to be fair, the kit doesn't sound like a bad thing. It bumps the UK-spec 2.0-liter, 157-horsepower engine up to 203 hp thanks to a sports exhaust and a revamped ECU (46 horsepower from an ECU and exhaust in a naturally aspirated car?). To make the little Miata even more agile, Jota has also fiddled with the suspension. AE doesn't mention things like the grippy tires or Recaro seats that were found on the concept, though.

How much would you be willing to spend on an MX-5 GT? The base car starts at $23,720 for a Sport Softtop, but let's assume you want to go with the $26,905 Club Softtop to get the six-speed manual transmission. What's the right price for the GT package, installed and with its three-year warranty? Let us know in Comments.