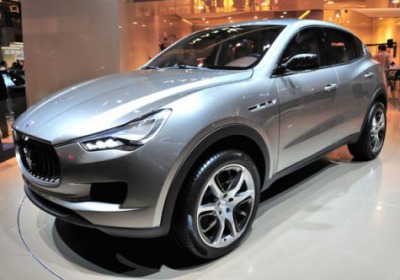 Building on the introduction of the GranCabrio MC that debuted at the Paris Motor Show, Maserati is planning three new models over the next couple of year in an attempt to raise sales to 50,000 units annually by 2015. While we think that that is a pretty lofty goal for a boutique automaker, redesigning its flagship sedan and adding two all-new models in popular segments sounds like a great plan of attack

The first new car we'll see from the Italian automaker is the next generation of the Quattroporte which will be a fitting way to celebrate the car's golden anniversary. We've already seen spy pictures of the new Quattroporte testing as well as a series of patent drawings that reportedly show the car's basic lines. Expect the new Quattroporte out sometime next year with a possible launch at the Detroit Auto Show.

Following the new Quattroporte, we'll finally get to climb behind the wheel of a Maserati SUV... just not the Kubang. Maserati confirmed that its new utility vehicle, based on the Jeep Grand Cherokee, will in fact be named the Levante. We already knew that Maserati would definitely not be using the odd Kubang name after this year, but if the Levante name sounds familiar, it's because we previously reported that this name would be used on a sedan slotting in below the Quattroporte.

Speaking of this new sub-Quattroporte sedan, Maserati also announced that this all-new model would wear the Ghibli name. Both previous Maserati Ghibli models were sporty two-door cars, but this latest take on the name will be a full-size sedan going up against cars like the Mercedes-Benz E-Class and BMW 5 Series. No word as to when we might see the new Ghibli on the road.

While we have the naming down for Maserati's newest products, we have few other details about these three new models, but we suspect Maserati will remedy this over the next year or so.

"The international spotlight of the Paris Auto Show – where Maserati is introducing the new GranCabrio MC – is the perfect setting to announce the names of the three much awaited future Maserati products, the models that will give Maserati a completely new scope to 50,000 units per year by 2015.

The first of the announced new models is the all-new Maserati Quattroporte, the sports luxury sedan that will continue the 50-year success story begun in 1963, when Maserati created a new segment of the automobile market with the introduction of the first Quattroporte.

The new high-end E segment four-door sedan will be named Ghibli – a name that draws directly from Maserati's rich and successful tradition.

Finally, the name of the sports luxury SUV that will spring from the Kubang concept is Levante – as in Via Emilia Levante in Bologna, where the Maserati brothers, almost a century ago, dreamt of the company that today still bears their name. Considering that Levante will be marketed in 2014, the year Maserati will celebrate its Centennial, it seems a proper name and, in many ways, a bridge to Maserati's future."