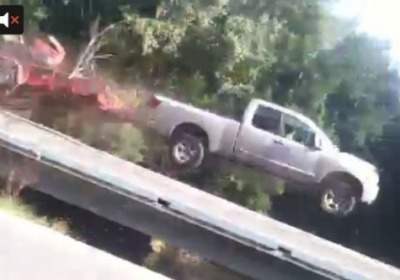 Earlier today, a man from Kentwood, Michigan was seriously injured after a bizarre accident on Interstate 96 outside of Lansing. While he's expected to make a full recovery, it's the footage captured by another driver that makes this incident so remarkable.

The 59-year-old driver of the Nissan Titan involved in the crash was towing a trailer when he hit the median and was catapulted over a guardrail into a local creek. A driver that was traveling alongside caught the entire incident on Vine, creating a disturbing loop of the truck flying through the air, before disappearing from view.

The man was recovered by rescue services, taken to a hospital, and is expected to make a full recovery. It's unclear what caused him to lose control and end up on the median. Scroll down for the six-second Vine video.