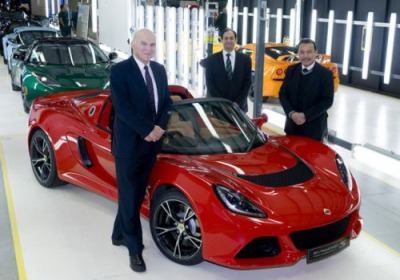 Troubled British automaker Lotus is getting a second infusion of cash following a 100-million-pound ($161.5-million) investment by its parent company DRB-Hicom that was made in August. The substantially smaller investment, a mere 10 million pounds ($16.2 million), comes from the British government's Regional Growth Fund.

The fund, which is part of a 3-billion-pound ($4.8-billion) fund to spur economic growth in the UK, will allow Lotus to invest even further in research and development as it seeks to reinvent its lineup of lightweight sports cars. The fund will also allow the UK-based outfit to provide further training for its new crop of employees.

"This grant is part of a wider strategy for Lotus created to ensure we thrive and grow. We are responding to increased global demand for our cars and engineering consultancy services and this grant will help to position Lotus as the forefront of global automotive innovation," said Aslam Farikullah (shown above with UK Business Secretary Vince Cable MP), the chief operating officer at Lotus.

Scroll down for the official press release from Lotus.

The Regional Growth Fund (RGF) has awarded Lotus £10.44 million, which will be used for research and development of products, along with staff training. In addition Lotus is expected to create 313 new full time jobs to support production over the coming years.

The grant is a further boost for Lotus, following a £100 million investment by its owners DRB-HICOM which has allowed the company to enhance its engineering, productivity, efficiency and quality. Lotus is also recruiting for more than 130 new jobs, previously announced in July 2013.
The Regional Growth Fund (RGF) is a flexible and competitive £3.2 billion fund operating across England from 2011 to 2017. It supports projects that are using private sector investment to create economic growth and sustainable employment.

Aslam Farikullah, Chief Operating Officer at Lotus, said: "This grant is part of a wider strategy for Lotus created to ensure we thrive and grow. We are responding to increased global demand for our cars and engineering consultancy services and this grant will help to position Lotus at the forefront of global automotive innovation.

"We have very exciting plans for our sports cars and it's a very positive move for Lotus that we're in a position to create new jobs and to significantly contribute to Britain's automotive industry.

"The team here at Lotus have worked very hard to secure this grant and every employee is playing their part in the stability, growth and future success of our company."

Business Secretary Vince Cable said: "Lotus is an iconic British car maker, with some of the most innovative engineers in the business. The car industry is one of Britain's great success stories, employing over 130,000 people and helping to build a stronger economy by contributing £11 billion a year. The Government's industrial strategy is working and giving business the confidence to invest, creating more high skilled, long term jobs in the UK"

"I am pleased to announce today that our flagship economic plan to create jobs outside of London - the regional growth fund - is awarding Lotus a £10 million grant which will help them develop their next generation of cars and create over 300 new jobs in East Anglia. The Government has already supported over 400 projects with £2.6 billion from the Regional Growth Fund, promoting growth in regions across England. The latest round is still open for another two weeks and I'd urge all businesses with a plan to support jobs in their local areas to apply"