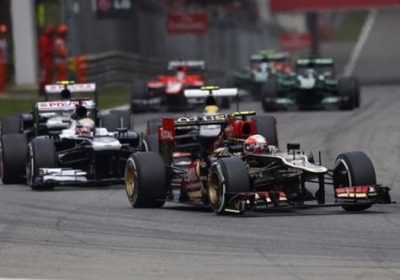 The team currently known as Lotus has had a long string of accomplished drivers behind the wheel, including world champions like Nelson Piquet, Michael Schumacher, Jenson Button, Fernando Alonso and Kimi Raikkonen. But Kimi is returning to Ferrari next season, leaving a big question mark over who would fill his seat. And now we have our answer.

Lotus has just announced that it has signed Pastor Maldonado to partner with Romain Grosjean for next season. The surprise winner of the 2012 Spanish Grand Prix has been driving for Williams for the past three seasons, signed after he won the GP2 title in 2010. Though lauded as an emerging talent, Maldonado is clearly not the accomplished champion Raikkonen is, however Lotus apparently needs the money which Maldonado brings with him in the form of sponsorship from the Venezuelan state oil company PDVSA.

Meanwhile, Romain Grosjean, also a former GP2 champion, has been with the team for some time now, starting as its test driver in 2008, promoted for one season to the race seat in 2009, and returning again in 2012. He's been the second driver at Lotus ever since, achieving career-best second-place finishes at the 2012 Canadian Grand Prix and 2013 United States Grand Prix. Whether it will be Grosjean (who gets the higher number) or Maldonado that emerges as the dominant force at Lotus remains to be seen. Scroll down for the complete press release.

Grosjean and Maldonado to Drive for Lotus F1 Team in 2014

Pastor – a veteran of 58 Grand Prix starts, including pole position and victory at the 2012 Spanish Grand Prix – has driven for Williams F1 Team since entering the sport at the start of the 2011 season.

Romain has raced for Lotus F1 Team since the start of the 2012 season, having previously driven for the Enstone outfit in its former guise of Renault F1 Team during the final seven races of the 2009 season, in addition to serving as third driver for the team in 2011.

Eric Boullier, Team Principal
"It is with great pleasure that we can formally confirm that Romain Grosjean will continue with Lotus F1 Team next season. He has really made the most of his tremendous talent over the latter part of the 2013 season and will be a fantastic asset to our 2014 challenge. Romain will be joined by Pastor Maldonado; a driver I have known since he drove for me at DAMS in the 2005 World Series by Renault season. It is clear that Pastor has pace and potential – demonstrated by his 2010 GP2 Series title success and then through strong races throughout his career at Williams F1 Team – and we are convinced that we will be able to provide the correct environment to enable him to flourish regularly on track. We have been working on our new car in alignment with the new regulations for over two years and we are confident that we have a very good solution to all the challenges ahead. With Romain and Pastor I believe Lotus F1 Team will be able to cause quite a few surprises next year."

Romain Grosjean, Lotus F1 Team Driver
"I am very happy to have official confirmation that I will be continuing to drive for Lotus F1 Team next season. This past year has been tremendously satisfying for me. We have worked well together, and I know everyone at Enstone is motivated to continue the fight for every last point available. I am very excited about next year's car and I cannot wait to get out on track for pre-season testing before heading to Australia for the first race of the season."