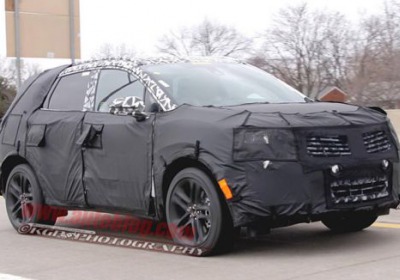 As was the case with the Lincoln MKZ, it appears that Lincoln isn't wasting any time getting its newest model transformed from concept to production form. We just saw the MKC Concept earlier this year at the Detroit Auto Show, and based on these spy shots, it looks like the final touches are being put in place for the 2014 Lincoln MKC crossover.

Sharing its platform with the Ford Escape, we can definitely see some similarities between these two compact crossovers when it comes to the roofline and daylight opening, but through the heavy camouflage, Lincoln's signature split-wing grille can easily be seen and it looks like the concept's taillights will also make it to reality. On the disappointing side, it looks like the integrated exhaust outlets are being ditched for some round outlets, and we can't tell if the production version will keep the Audi-like clamshell rear liftgate.