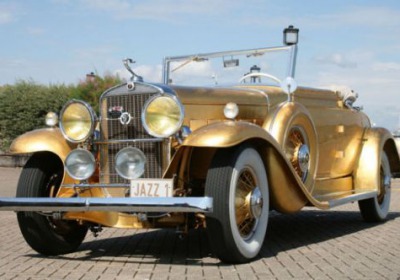 With their chrome grilles and oversized wheels, it's hard not to notice a Cadillac these days. But this one is even more blingtastic on account of the 23.75-karat gold-leaf bodywork.

The 1931 Cadillac Golfer's Drop Head Coupé is said to have belonged to the inimitable performer Liberace, who didn't just have it covered in gold – he also had the exterior door handles plated in silver and the inside handles in 24-karat gold as well. It's also got a white leather interior and headlights that – well ahead of their time (if you'll pardon us, Mr. Tucker) – pivot with the steering wheel. All that bling is powered by a 5.7-liter V8 mated to a three-speed automatic transmission that pales in comparison to the seven, eight and even nine-speed gearboxes appearing on luxury sedans today.

The project was undertaken over the course of three years in the 1970s by one Jack Smith from Kansas. Smith (if that was his real name) sold it at auction in 1975, and it was most recently displayed for 12 years at a museum in Germany which claimed it was Liberace's own. The car is now going up for sale by Barons' at the Sandown Park horse racing track in Surrey, England, on September 17, when bidding starts at 85,000 pounds – equivalent to over $130,000 at today's rates.

ALL THAT GLISTENS IS GOLD – GOLD-LEAF 'LIBERACE' CADILLAC SET TO SHINE AT BARONS, SANDOWN PARK

The lead car in Barons' sale at Sandown Park on September 17th is guaranteed to turn heads. In fact, it could probably stop traffic! The 1931 Cadillac Golfer's Drop Head Coupé - which is believed to have once belonged to the flamboyant pianist Liberace - features 23.75ct gold leaf-clad bodywork, silver external door handles and 24ct gold-plated internal door handles.

These gleaming embellishments are the results of a lavish, three-year project carried out in the 1970s by the then-owner, Jack Smith of Kansas, USA. Mr Smith sold the car at a Kruse auction in 1975, and in more recent years it has spent 12 years on display in a German museum - where it was presented as Liberace's car. The gold leaf coachwork is offset by white leather upholstery and a working hood completes this truly extraordinary vehicle, which also has driving lamps that move with the steering wheel. The car is powered by a 5.7 litre V8 engine, mated to a three-speed manual transmission. The guide price for this very rare Cadillac - part of a large private collection which is being reduced - starts at £85,000.

Like its reputed former owner, the Cadillac is something of a hard act to follow, but Barons has a diverse array of cars on offer at Sandown Park, with everything from starter classics to highly desirable lots for established collectors. The 1999 Ferrari 360 Modena is another head-turner, its bright yellow paintwork almost as eye-catching as the Cadillac's gold leaf. This Prancing Horse has covered just 36,000 miles from new and is in outstanding condition. £32,000-£35,000.

The September sale represents an ideal opportunity for a first-time classic owner to acquire a car while they still have a month or two of relatively good weather with which to enjoy their new possession before storing it for the winter. Starter classics include the very charming French blue 1972 Fiat 500 with brown leather interior, and the Toyota Corona which is believed to be the earliest surviving example in the UK, registered on January 3rd 1967. These carry estimates of £4,750 to £5,750 and £1,750-£3,000 respectively.

Triumph Stags are always popular, and the example at Sandown Park features very distinctive, Magenta paintwork. It is offered complete with both hard and soft-top and has an estimate of £4,750-£5,750.