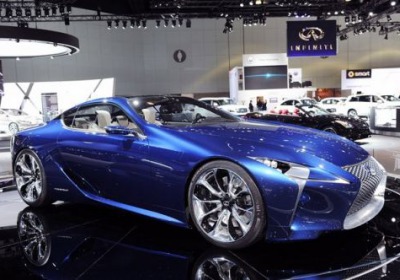 Jeff Bracken, Lexus' US group vice president and general manager, knows his company lost its position as America's biggest luxury brand back in 2011, and it's a mantle that his employer probably won't be getting back any time soon. That's because Lexus is electing not to follow the luxury segment's downmarket trend any more than its $32,500 CT 200h hybrid hatchback. "Since we won't be going down below $30,000, it will be very difficult for us to ever regain luxury leadership," Bracken admitted on Autoline After Hours late last week.

Rivals Mercedes-Benz, BMW and Audi all have new low-end entries on sale or in the wings to entice new buyers and fortify their CAFE scores, but Lexus has Toyota and Scion to capture sales underneath its lineup. Instead, Bracken hints that Lexus is going upmarket and higher-performance, fueling ongoing rumors of a LFA successor, or perhaps a new offering based on the lauded 2012 LF-LC coupe concept shown above, a production version of which could also slot in where the unloved SC convertible left off. "We need to begin bringing to market luxury performance... higher performance vehicles. IS-F certainly was the beginning of that, maybe on the lower end," says Bracken.

Later in the online video interview show, Bracken gets even more candid:

We've revealed the LF-CC now as an RC, right? Do you like the styling? So we feel the same way, and that would be a great example of Akio's thumbprint on where he's trying to take the company as it relates to beautiful styling. IS, RC, and hopefully these concepts you've become familiar with will ultimately make it to production."

The "Akio" in the quote above is, of course, CEO Akio Toyoda, who has made injecting emotion into the way his family's companies vehicles drive and look a top priority.

To that same end, earlier today, Lexus announced plans to reveal an unnamed new F-branded performance model at next month's Detroit Auto Show, but it isn't going exclusively top-shelf with future products – a compact crossover based on the LF-NX showcar is expected to slot in underneath its hugely successful RX CUV, bringing along with it a new turbocharged four-cylinder (an engine also expected shortly in the new IS sedan).

Lexus has not diversified its alternative fuel powertrains as much as its key rivals, most of which now offer both diesel and hybrid variants in at least one or two key models. On this subject, Bracken remains pessimistic, saying, "We have elected at this point not to head down the diesel path," while also saying that Lexus has no near-term plans for a plug-in model, nor any firm plans for a bi-fuel compressed natural gas offering.

For more of Bracken's musings on Lexus' future, scroll down to watch the Autoline After Hours episode video below.

See also: 'Next Lexus F' teased ahead of Detroit debut, Production Lexus NX small CUV headed for Geneva, 2014 Lexus CT shows new face on each side of the Pacific [w/video].