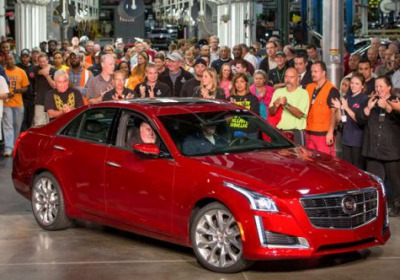 Cadillacs are built at plants across North America. The Escalade is assembled in Texas, the SRX in Mexico and the XTS in Ontario. But the bulk of Cadillac's lineup – or the smaller members of the family, at least – are built in Michigan. And while the upcoming ELR will be built alongside the Chevy Volt at the Detroit/Hamtramck facility (which incidentally opened with the Cadillac Eldorado back in '86), the majority of those Cadillacs built in Michigan are handled by the Lansing Grand River Assembly Plant.

In fact, Lansing Grand River just celebrated its millionth Cadillac built. The landmark millionth vehicle is a new 2014 CTS sedan in Red Obsession Tintcoat. The facility opened in 2001 and has built Cadillacs almost exclusively since then, assembling the CTS and ATS model lines, though in a couple of years it will also handle production of the Chevy Camaro.

LANSING, Mich. – The millionth Cadillac built at the Lansing Grand River Assembly Plant rolled off the line today. Fittingly, the milestone vehicle is an early model of the redesigned 2014 CTS sedan, which goes on sale in October.

Lansing Grand River, or LGR as it is known, has been a dedicated rear wheel-drive assembly plant since it opened in late 2001. Every CTS ever made has been built there.

In addition to the CTS, the plant also assembles the award-winning ATS sport sedan, the CTS Coupe and Wagon, and the CTS-V high performance models. Cadillacs from Lansing are exported from Michigan to 11 destinations worldwide.

"One million Michigan-made Cadillacs is a great milestone for Lansing and for luxury car-building in America," said Bob Ferguson, senior vice president Global Cadillac. "Lansing Grand River is an essential ingredient of Cadillac's growth. It is a benchmark for luxury car manufacturing in North America, which takes another step forward today with the launch of the new CTS."

The celebrated 2014 CTS sedan is painted in Red Obsession Tintcoat. The 2014 CTS is elevated and expanded, with more luxury, performance and technical sophistication. The third generation luxury sedan is larger and more spacious, but lighter because of advanced design and materials. The low mass approach is expected to enable CTS to deliver the most agile and engaging driving performance in the midsize luxury class.

A total of 1,541 employees are divided among two shifts at Lansing Grand River, a 2.5 million square foot facility on 111 acres.

Since its completion 12 years ago, Lansing Grand River has produced more Cadillacs than any other plant. The Escalade sport utility vehicle is produced at the Arlington Assembly in Arlington, Texas. The ELR luxury coupe begins production later this year at GM's Detroit-Hamtramck facility in Hamtramck, Mich.