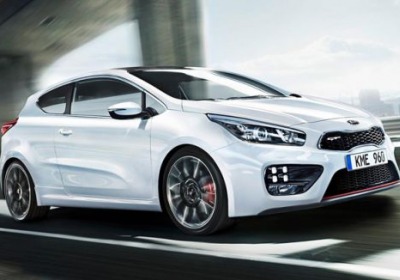 Kia has been releasing a lot of new models lately, showcasing improvements in both design and luxury, but a pair of introductions at the 2013 Geneva Motor Show could bring the automaker into the performance mindset. The five-door Kia Cee'd and three-door Pro_cee'd will be getting new GT trim levels that bring a little more horsepower and sportier styling to the compact hatchbacks.

For added power, the 1.6-liter direct-injected inline-four packs a new turbocharger that bumps engine output to 201 horsepower and 195 pound-feet of torque (an increase of 68 hp and 74 lb-ft), which is good enough to quicken the cars' 0-60 times to under eight seconds flat. Unfortunately, it doesn't appear that there are any suspension upgrades, but the cars do get a dual exhaust system and 18-inch alloy wheels. Red brake calipers and a unique front fascia finish off the exterior styling, while Recaro buckets and a "GT" embroidered steering wheel can be found inside.

Both the Cee'd GT and Pro_cee'd GT will be on sale by the end of this year, and although we don't expect to see these cars in the US, adding a GT model to the Rio or Forte doesn't seem like it wouldn't be that hard.

Kia pro_cee'd GT and cee'd GT to debut at 2013 Geneva Motor Show
Most performance-focused Kia models yet
204 PS and 265 Nm from turbocharged 1.6-litre engine
Designed and to be manufactured in Europe

The new Kia pro_cee'd GT and cee'd GT – the brand's most performance-focused production cars ever – will enjoy their world premieres at the 2013 Geneva Motor Show on 5 March.

Production of the newest members of the latest generation cee'd family is scheduled to start at Kia's Zilina plant in Slovakia in mid-May. The pro_cee'd GT is anticipated to go sale in the UK from the middle of the year and be joined by its cee'd GT counterpart towards the end of 2013.

Prices and specifications will be confirmed closer to the on-sale dates.