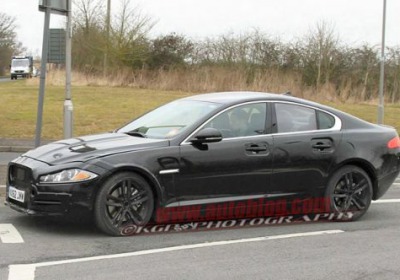 Small sedans are big business for luxury automakers. The C-Class is the top seller for Mercedes-Benz, much as the 3 Series is for BMW, but Jaguar has historically missed out on that market. Its last attempt, the X-Type, proved woefully inadequate, and Jaguar hasn't attempted to take on that market again since. But that's all about to change.

Coventry has been working on a new small Jaguar for some time now (using test mules like the one above wearing modified XF body panels), and according to the latest reports coming in from the UK, it will showcase the result of those efforts at the Paris Motor Show next October. The show car will take the form of a pre-production concept that is expected to preview the production version very closely before the final item is unveiled at the 2015 Geneva Motor Show.

Tipped to be called XS (somewhat appropriately for the brand's smallest model), the new sedan is expected to be the first to use the company's new aluminum platform previewed by the C-X17. Expect styling to follow along similar lines to said crossover concept and the F-Type sportscar, with eventual sedan, wagon and coupe versions to round out the family.