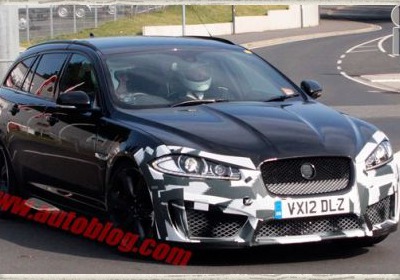 This is the Jaguar XFR-S Sportbrake, which is too cool for North American sale (the Sportbrake, not the XFR-S sedan, which we're getting soon). Like the XFR-S four-door, it has a 5.0-liter, supercharged V8 pumping out around 550 horsepower.

Our spy photographer's x-ray vision is saying that a ZF eight-speed automatic will be the gearbox of choice for the XFR-S wagon, which fits with the sedan, as well. The Sportbrake also has the usual high-performance touches, with huge air intakes in the front fascia, big wheels wrapped in low-profile tires, a dropped suspension and a rear end that's wearing a diffuser and a pair of meaty, quad exhausts. We're happy to see that the XFR-S Sedan's rear spoiler - or some iteration thereof – isn't here to mangle the Sportbrake's beautiful shape.

Where the this super-fast hauler will debut remains a question. There's virtually zero chance of it arriving at an American auto show (although we do endorse that, and any other decision that brings this wagon to our shores), which likely means it'll be in Europe. The Frankfurt Motor Show and Geneva Motor Show seem like the leading contenders, but we'll just have to wait and see.

See also: Highlights from the Goodwood Festival of Speed, including the McLaren P1 and a Ford Transit running the hill, Jaguar Project 7 concept is an F-Type in a D-Type mold [w/video], Jaguar F-Type 'Design Study' headed to Goodwood.