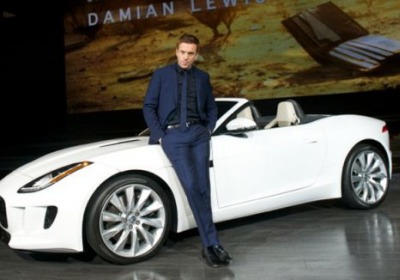 Jaguar is working up a short film to coincide with the US debut of the company's new F-Type. Desire will feature actor Damian Lewis in the lead role opposite Jordi Molla as the main villain in the story. The whole of the action will take place against the picturesque backdrop of the Chilean desert with filming starting early next month. According to Jaguar, the story will follow Lewis as he plays Clark, a man who delivers cars for living. Things get exciting when he crosses paths with a young woman played by Shannyn Sossamon.

With music by Lana Del Rey and some serious production value, Desire sounds keen to take its place among great automotive advertising short films like the BMW Driver series. Jaguar has released a quick teaser, which you can check out by heading over to the F-Type site. You may also take a peek at the full press release below for more information. Expect to see the film debut early next year.

Golden Globe nominee and Emmy Award winning actor, Damian Lewis, to take the lead in a short feature film, created by Jaguar in association with Ridley Scott Associates and to be released early 2013

Jordi Molla named as the villain in the short film

The soundtrack to the film has been written by singer songwriter Lana Del Rey. The exclusive track named 'Burning Desire', was inspired by the Jaguar F-TYPE

Jaguar tonight revealed the F-TYPE sports car to 350 VIPs ahead of its US Auto Show debut. The car made its dynamic entrance at Paramount Pictures Studios on a road built over the famous studio's sunken water tank.

Damian was not the only cast member in attendance at the event, his 'Desire' co-star, American actor, Shannyn Sossamon, was also present. Additionally, guests were treated to the premier of a trailer teaser for the movie, which will be filmed in Chile over a five-day shoot next week.

The film tells the story of Clark (Lewis), who delivers cars for a living, running into trouble after a chance encounter with a mysterious, young woman (Sossamon) in the middle of a lawless desert. Directed by Adam Smith, this is a story of betrayal, retribution, passion and greed.

"When Jaguar approached me about the F-TYPE Desire film I was really intrigued. I then got to read the script and decided it was definitely a project I wanted to be a part of. Working with the director Adam Smith from Ridley Scott Associates, it promises to be an adventure. Jaguar cars have played some iconic roles in film for many years and I'm looking forward to being the first to drive the F-TYPE in film".

Over the coming weeks, Jaguar will release exclusive content from the set itself in Chile's Atacama Desert. This will give viewers the chance to get behind the scenes and really feel part of the production.

"We are hugely excited to be collaborating with Jaguar on this project, and to be working with such a fantastic cast."

"Film sets have traditionally kept viewers out, but through crafted updates and content we will welcome them onto the set in an unprecedented way, from the shoot in early December through to the launch of the film in March. We want viewers to see how the process unfolds through our eyes and to be a part of it alongside us."

Throughout the project Jaguar will be employing innovative techniques to share the film set experience and mastery with their audience. From using button hole cameras attached to the cast and crew; gaining insight from stunt coordinators and wardrobe; to setting up mobile Go Pro cameras on helicopters and cars to provide unique views from the set that viewers would never otherwise see.

"The parallels between the world class creativity and technical capability that led to the creation of F-TYPE, and the unique collaboration between Ridley Scott Associates and Emmy award winner Damian Lewis are self-evident."

"Jaguar is synonymous with some of the most iconic moments in cinematic history, and we're excited about reigniting this powerful combination through a British led, world class artistic project. Our aim is to craft the most visionary and highest quality filmic product ever created in conjunction with a brand, as a platform for our most important product launch in 50 years – the Jaguar F-TYPE".

The new Jaguar F-TYPE represents a return to the company's heartland: a two-seater, convertible sports car focused on delivering performance, agility and maximum driver reward. The F-TYPE is a continuation of a sporting bloodline that stretches back more than 75 years and encompasses some of the most beautiful, thrilling and desirable cars ever built, including the iconic E-type.

To find out more about 'Desire' please visit;
www.ftype.com/desire

See also: Jaguar F-Type greets US, shows off range of personalization, 2014 Jaguar XFR-S is the power and the fury, Jaguar and Land Rover to consolidate dealerships.