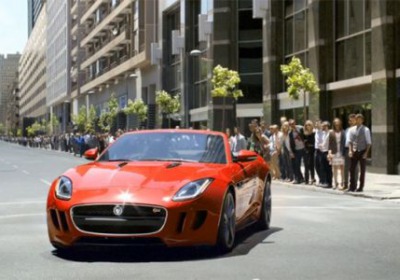 With its new "Your Turn" global ad campaign, Jaguar has introduced its 2014 F-Type to the world of broadcast media. The effort takes aim at the monied 25-54 demographic, which makes sense of Jaguar recently shacking up with the 2013 Playboy Playmate of the Year Raquel Pomplun and San Francisco NFL quarterback Colin Kaepernick. You'll also be seeing the new roadster on ESPN's SportsCenter, late night ABC talk show Jimmy Kimmel Live, the USA Network show Covert Affairs, the Sundance Channel and theaters, magazines and everywhere digital. On top of all that, a social media campaign includes a contest called #MyTurnToJag that will reward four winners with a custom drive in the new convertible.

You'll find the first two spots below, along with a press release on the roaring red marketing onslaught headed your way.

(MAHWAH, N.J.) – May 13, 2013 – Today, Jaguar announced the details of the global advertising and marketing campaign "Your Turn" to support the launch of its definitive sports car – the all-new F-TYPE. As Jaguar's first new true sports car model in 50 years, the 2014 F-TYPE represents a return to the company's heartland: a two-seater, convertible sports car focused on performance, agility and driver connection.

"We have built on Jaguar's sports car heritage which stretches over 75 years, and in the F-TYPE we have reignited the flame," said Adrian Hallmark, Global Brand Director of Jaguar. "The Jaguar F-TYPE sports car – not designed to be like anyone else's sports car – is ultra-precise, powerful, sensual and most of all it feels alive. The campaign perfectly embodies all Jaguar's values."

The multi-channel global campaign will include integrated activity across TV, cinema, print, digital, mobile and tablet, as well as experiential and social media. Spark44, the lead strategic communications partner for Jaguar, was responsible for the creative positioning and strategy, experience architecture, website design, and all creative executions. Media planning and buying is managed by Mindshare.

The U.S. execution of the global campaign, will focus heavily on TV and digital with some integrated print executions, and leverage personalities that will appeal to a more youth-minded audience.

"The integrated campaign strives to engage customers with an emphasis on the F-TYPE vehicle's performance, sound, look and feel," said Joe Torpey, Communications Manager, Jaguar North America. "The media plan speaks to the cars' personality via partners like ESPN and Playboy for example, and has live elements with integration of the vehicle in motion. This is the most exciting, and important marketing launch for Jaguar in many years driving us to create a highly engaging approach to market and bringing consumers into the experience."

The first commercial, "Great Expectations" is the first of two TV spots, and aired last night during the season finale of ABC's 'Once Upon A Time'. At the end of the commercial, viewers were invited to use the hashtag #MyTurnToJag to experience the F-TYPE sports car on a test drive of a lifetime. MyTurnToJag is a social media contest where Jaguar enthusiasts and social media fans can submit a story explaining why it is their turn to drive the all-new F-TYPE. Four winners will be selected based on their submission, and Jaguar will curate an amazing drive for each winner in different regions of the country: New York, Los Angeles, Miami and Chicago. The drives will be filmed and shared across Jaguar USA's social channels.

The F-TYPE is one of most highly anticipated vehicles to launch this year; over 50,000 people have already expressed interest. The "Your Turn" campaign targets the F-TYPE sports car's target audience of 25-54 year olds, comprised of consumers with varied interests and lifestyles. Jaguar's media agency, Mindshare, created a marketing program touching on a variety of outlets, including activations in broadcast; cinema; high-impact digital; and Connected TV platforms which will appeal to early adopters. Campaign highlights include:

- Exclusive ownership of an entire ESPN SportsCenter episode featuring notable athletes, such as San Francisco 49er Colin Kaepernick experiencing the F-TYPE, as well as exclusive commercial content with on-air commentator Stuart Scott
- An integrated partnership with Playboy, where Jaguar took part in the May 9 announcement of the 'Playmate of the Year', and will share the faux June cover with her. In addition, Jaguar will co-host a party during the Pebble Beach Automotive Weekend with Playboy
- Integration of the F-TYPE in a 'Jimmy Kimmel Live' commercial incorporating the playmate of the year, Raquel Pomplun
- Season-long partnership and integration with USA Network's hit series, 'Covert Affairs' including a custom vignette highlighting the F-TYPE involvement in the show
- Presenting sponsor of Sundance Channel's 'Rectify' featuring brand inclusion across all show promotion, with vignettes showcasing the F-TYPE and content from the show
- Performance-focused F-TYPE long-form content piece highlighted on Speed TV

The F-TYPE introduces a new sports car design language for Jaguar, incorporating bold, clean lines accented by the discreet use of technology, including a deployable rear spoiler and hidden door handles. This vehicle is the first official sports car that the brand has offered in over 50 years. With front-engine, lightweight aluminum architecture and rear-wheel drive, the F-TYPE is engineered to be a true high-performance sports car. The car will be available in three models: F-TYPE, F-TYPE S and the F-TYPE V8 S. The Jaguar F-TYPE sports car has a starting MSRP of $69,000* and will be in US showrooms this month.

About Jaguar
Jaguar is a premier manufacturer of luxury sedans and sports cars offering unparalleled design with tremendous performance. The company's vision throughout its storied history has been simple: To produce beautiful, fast cars that are desired the world over. Jaguar strives to provide a world class ownership experience to every owner. Today's Jaguar lineup consists of the XJ luxury sedan, XF sports sedan and the XK coupe and convertible sports cars. Jaguar designs, engineers and manufactures exclusively in the United Kingdom, at the Castle Bromwich manufacturing plant in the British Midlands. Jaguar is fully engaged with sustainability initiatives and social concerns with continuous involvement in environmental and community programs. For more information visit the official Jaguar website at http://www.jaguarusa.com.

About Spark44 (www.spark44.com)
Spark44, a global communications company with offices in UK, USA, China and Germany, is a joint venture agency owned by Jaguar Land Rover and Spark44 management. Formed in June 2011, Spark44 is the lead strategic, global creative partner for Jaguar, responsible for creating specific demand through all media channels, including the new Jaguar website: http://www.jaguar.co.uk that is currently being rolled out world-wide. Spark44 is helping to re-launch one of the most iconic brands in automotive history, Jaguar.

See also: Playmate of the Year Raquel Pomplun gets a Jaguar F-Type, Chinese patent filing shows what could be next Royal Limo from Jaguar, 2013 Jaguar XF 2.0T.