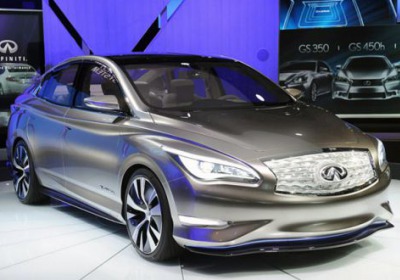 Aside from certain naming-related news, Infiniti has actually had some decent product news to announce this week. The company's president, Johan de Nysschen, alluded to a new 550-horsepower performance sedan, and now the automaker has confirmed that a new "premium compact" will go into production in 2015. Based on the fact that this new model will be built alongside the Nissan Leaf at the automaker's Sunderland, UK assembly plant, we could only hope that it's a production version of the LE Concept (shown above).

Sunderland already produces Nissan products like the Qashqai, Juke and Note, and as a part of an investment of 250 million British pounds (around $406 million USD) for the new model, the plant would add an extra 280 jobs with the capacity to build 60,000 of the new Infinitis annually. Adding the premium compact at Sunderland means that Infiniti will have to change its plans for another new model, a bigger "C-segment hatchback," which could very well be a production version of the Etherea Concept.

- Infiniti's first premium compact car to be produced at Nissan's UK Plant in Sunderland from 2015
- Around £250 million investment
- Around 1,000 additional UK jobs
- Announced in the week that Sunderland produces 500,000 units annually for the first time, an all-time industry record

The announcement represents a substantial investment of around £250mn into the facility and is expected to create a further 1,000 jobs at Sunderland and across the UK.

Colin Dodge CBE, Nissan Motor Co. Ltd Executive Vice President and Chief Performance Officer, stated: "This milestone, our first premium product to be manufactured at Sunderland, reconfirms our commitment to UK manufacturing and the ongoing success of the plant, which is moving up the value chain.

"Just as important, the new Infiniti, which will be exported around the world, is being developed with help from our London design centre and our European Technical Centre at Cranfield."

Attending a ceremony at Sunderland, Business Secretary Vince Cable said: "Sunderland will be the only place in the world to make this new premium compact car. Nissan in the UK goes from strength to strength – not only will the new car be made here and exported all over the world, the UK has already contributed to its design and development.

"Today's news is a strong endorsement of the quality of Britain's car industry, which is creating jobs, taking on apprentices and contributing to building a stronger economy. The auto sector is living up to being one of the great success stories of our industrial strategy and a testimony to government and private sector working together in close partnership."

Prime Minister David Cameron added: "This investment is excellent news for the North East and another vote of confidence for UK manufacturing.

"The continued success of Nissan in the UK demonstrates the strength of the car industry here, and its importance, as we rebalance and grow the economy.

"This announcement shows how the car industry in partnership with the Government continues to win important long term investment projects, in a tough competitive sector; helping the UK to get ahead in the global race."

The exciting all-new premium entry compact Infiniti model is expected to be produced from 2015 and will allow the company to compete within the heart of the premium segment for the first time, underlining the brand's ambition to become a major worldwide competitor.

When production begins, Infiniti will become the first new car brand to be manufactured in the UK on this scale in 23 years.

UK Production of Infiniti is expected to create an additional 1,000 jobs across the country, including 280 new jobs at the Sunderland Plant, with a capacity to produce 60,000 Infiniti models per year.

The announcement coincides with the news that this year, Nissan's Sunderland Plant will produce more than half a million cars for the first time - the first UK manufacturer to achieve this milestone. During 2012, employment on site passed 6,000 for the first time and global exports from the plant now exceed five million units.

Because of capacity limitations at Sunderland, securing the new Infiniti will mean that a C-segment hatchback previously announced for the plant in April will be manufactured elsewhere. Sourcing for this vehicle will be decided and announced at a later date.

About Infiniti
Infiniti was launched in 1989 in the United States. Infiniti's global footprint expanded into Canada in 1990, Taiwan in 1997, the Middle-East in 2004, Korea in 2005 and Russia in 2006. Global expansion continued in 2007 in the Ukraine and in China. In 2008 Infiniti launched in Western and Central Europe which has added 19 additional markets. Infiniti is sold globally in 47 markets to-date.

About Nissan Sunderland Plant
Production started at Nissan Sunderland Plant in September 1986. Total investment made and announced since then is over £3.5bn and total plant volume stands at more than 6.9 million units. 80 per cent of production is exported to 97 international markets. Its current model line-up is Qashqai, Qashqai+2, Juke and Note. Forthcoming production at the plant includes the 100% electric Nissan LEAF, the new Nissan Note and the next-generation Nissan Qashqai.