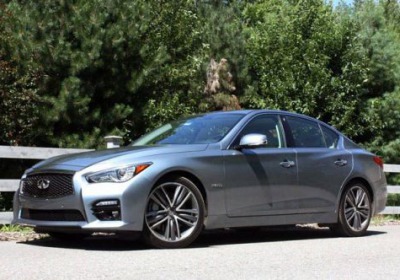 Nissan launched Infiniti back in 1989 as a US brand, but more recently, Nissan's luxury marque has started focusing on more of a global presence. With a new global headquarters set up in Hong Kong and former Audi bigwig Johan de Nysschen at the helm, Wards Auto is reporting that the automaker's next goal is to create a "de-Americanized" lineup of vehicles.

This plan essentially consists of smaller cars and smaller-displacement engines to make Infiniti more attractive for buyers in Europe and Asia – two regions that tend to skew more toward smaller vehicles and smaller powerplants. To this point, Infiniti has been focused on vehicles better-suited to the US market – in fact, its smallest engine is a 3.7-liter V6 with 330 horsepower, and it doesn't offer a single diesel.

The first step in this transformation will be part of the Daimler-Nissan engine deal that will see a four-cylinder diesel eventually used in the 2014 Q50, but the report also reconfirms the importance of the soon-to-arrive Q30 production model (a concept of which was revealed last week in Frankfurt), along with the idea of a QX30 based on the Nissan Qashqai. There's also the latest projection of a full-electric Infiniti model that Wards says will debut sometime around 2015. Of course, Infiniti isn't giving up on large cars entirely – the reports indicates that Infiniti is planning a fullsize flagship model – possibly named Q80 – to compete against German sedans like the Audi A8, BMW 7 Series and Mercedes-Benz S-Class.

This global strategy was likely a key factor in the brand's decision to rename its entire current lineup including the well-established G. Like all luxury automakers, Infiniti is eyeing growth in China, and it has plans to expand its dealer network in the country from 60 to 80, with the goal of having up to as many as 200 outlets by the end of the decade.

See also: Infiniti offers chance to design Sebastian Vettel's helmet for the USGP, Edmunds ranks the best used cars for 2013, Infiniti Q30 Concept might be the cleverest Q model yet.