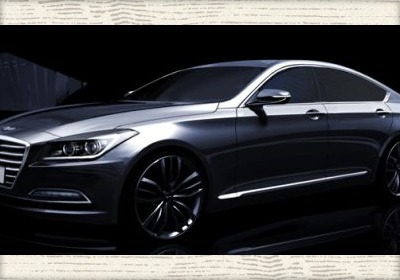 After we posted the renderings of the 2015 Hyundai Genesis last night, Hyundai issued a full press release revealing some of the details about its next-generation sedan. Set to make its debut at the Detroit Auto Show in a few months, the 2015 Genesis promises to bring a whole new level of styling and technology to the Korean automaker's portfolio.

Hyundai says that the design used on this car is part of its Fluidic Sculpture 2.0 language that we expect to slowly make its way across the entire lineup. Major styling changes include a taller, upright, single-frame grille (think Audi), larger headlights, sharper body lines and the swept-back, couple-like roofline. Except for spy shots, we still have no clue what the interior of the new Genesis will look like, but Hyundai says the sedan will be more intuitive for drivers to interact with. On the Genesis-foretelling HCD-14 Concept, this included a head-up display, as well as eye- and hand-gesture recognition.

For the drivetrain, Hyundai hasn't revealed much, except that the 2015 Genesis will get an all-new HTRAC all-wheel drive system. The sedan should also be better to drive, thanks to a more even weight balance, a stiffer chassis and Advanced Traction Cornering Control (ATCC) electronic suspension. Replacing the electro-hydraulic power steering system in the current model, the new Genesis will get a full-electric, rack-mounted power steering system. For more info on the upcoming 2015 Genesis sedan, check out the full press release posted below.

Oct. 24, 2013 – Hyundai Motor Company, South Korea's largest automaker, today held an 'All-New Genesis Media Preview' for the Korean media at Hyundai Motor Group's R&D Center and officially unveiled the first image renderings of the car. The purpose of the pre-launch media event was to promote its domestic launch scheduled later this year. Staging its world-premiere in Korea, the all-new Genesis will debut in major markets next year.

"Launched in 2008, Hyundai's first premium rear-wheel drive sedan Genesis surprised the industry with its outstanding product competitiveness," said Moon Sik Kwon, head of Hyundai Motor Group's R&D Center, in his welcome remarks. "The evolved all-new Genesis is the product of Hyundai's best resources and capabilities and we strongly believe it will be a game-changer in the market."

With a total investment of 500 billion KRW, the project began with the aim of developing a world-class premium rear-wheel drive sedan, and it took four years to develop the current model.

Since its introduction in 2009, Hyundai's unique design philosophy 'Fluidic Sculpture' has evolved to the next level and the all-new Genesis is the first model to adopt Fluidic Sculpture 2.0.

While maintaining its original essence, Fluidic Sculpture 2.0 is defined by core elements: Simple and harmonious design with refined fluidic design elements, modern Hyundai look with a singular hexagonal grille, easy-to-understand and pleasant design and rich visuotactile color, material and finishing of the car.

Switches are categorized depending on their function, facilitating easier control. Symbols are standardized for intuitive recognition, and the feel of the grip and control have been improved as well.

Starting with the all-new Genesis, future models will be designed based on Fluidic Sculpture 2.0 and its HMI principles.

The all-new Genesis significantly improved its safety in crash tests due to improved body structure and rigidity.

Its torsional and bending stiffness have been increased by applying more ultra-high-strength steel, hot-stamping and double-section structure on the front, partitioned engine room design as well as improved rear and center floor structures.

Passenger safety has been improved by the application of advanced seatbelt functions such as Emergency Fastening Device system (EFD), which tightly fastens passengers in crashes, and Pre-Safe seatbelt, which warns of danger in advance by tightening the seatbelt.

Hyundai's 'HTRAC' all-wheel drive system will also be available for the first time on the all-new Genesis. The advanced HTRAC system electronically controls torque split between the front and rear axles depending on road and driving conditions, offering greater stability on slippery roads and in corners. It also allows drivers to select driving modes for a sophisticated and tailored driving experience.

About Hyundai Motor
Established in 1967, Hyundai Motor Co. has grown into the Hyundai Motor Group, with more than two dozen auto-related subsidiaries and affiliates. Hyundai Motor - which has seven manufacturing bases outside of South Korea including Brazil, China, the Czech Republic, India, Russia, Turkey and the U.S. - sold 4.4 million vehicles globally in 2012. Hyundai Motor, which employs over 90,000 worldwide, offers a full line-up of products including small to large passenger vehicles, SUVs and commercial vehicles.