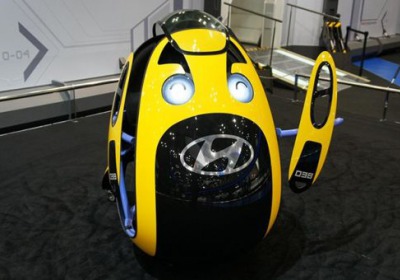 Hyundai has held an IDEA festival for the past three years that gives its engineers a break from seat belts, and electrical harnesses and wheel arch moldings. Each festival serves up a theme for personal mobility, after that there's no limit – competing teams can come up with anything that serves the theme and are encouraged to get creative.

That's how you get concepts like the E4U 'egg car' (pictured); a single-stander mode of transportation that channels Mork from Ork. The oddest thing about the egg is not the yellow shell but the helmet the 'driver' wears. Other ideas included a flying car with 16 (!) rotors, a bicycle that could serve as a spare tire and a car with five joints. Although most appeared totally impractical, all were totally cool.

This year's festival is in the works, the theme being the rather ambiguous "R&D for customers," the point is apparently to come up with concepts that Hyundai customers might actually use. There's a video with scenes of last year's festival and a press release below (our vote goes to the Pandora).

- Unique ideas for single-person future mobility, designed by Hyundai Motor Company's engineers, for use in congested cities
- Future mobility concepts submitted for internal competition called the 'IDEA festival' held in Korea - aimed to encourage creativity and new thinking
- Ideas include: E4U egg car, a multi-rotor flying car, a spare tyre electric bike, a portable transforming car, a five-jointed car, a road car/bike and a wind bike
- Hyundai currently preparing for the 'IDEA festival 2013'. This year's theme is 'R&D for customers' - focussing on how to meet customers' future needs. Idea submissions being made now, prototypes to be revealed in September

High Wycombe, April 12 2013 - Hyundai Motor Company reveals unique concepts for single-person future mobility, designed for use in congested cities across the globe. Prototypes have been created by engineers working at the company's research and development (R&D) centre in Korea for an internal contest called the 'IDEA festival'.

For the last three years, Hyundai has been organising this internal contest to enhance and expand R&D staff's creativity, and to discover fresh ideas for future mobility. There is always one overriding theme, but there are no boundaries for the ideas. Contestants demonstrate how new thinking can truly create new and innovative possibilities.

Hyundai's engineers submit their ideas, which get evaluated based on creativity, technology, fun and relevance to the theme.

Winning teams from the first round then compete in a presentation contest and approximately half of the ideas make it to the finals. The final ideas are produced and demonstrated on the festival day in Korea.

There was a wide range of prototypes showcased at the 'IDEA festival 2012', including the 'E4U' egg car, one of the winning ideas.

Hyundai is currently preparing for the 'IDEA festival 2013' with its staff submitting their ideas this month. The theme this year is 'R&D for Customers', focussing on how to meet customers' future needs. This reflects Hyundai's current strategy to focus on developing the brand and customer experience. Each winning team will turn its ideas into working prototypes and showcase them in September this year.

Ideas submitted for the IDEA festival 2012 included:
- A multi-rotor flying car - powered by four electric motors and propellers which means the car can hover above the ground, keeping the driver above congestion
- A spare tyre electric bike - a spare tyre that quickly folds out into an electric bike. Can be used in the event of a puncture when traffic is heavy, or can be used for leisure
- A portable transforming car –you can carry this around with you and driver can control it with their brain waves using mind control
- A five-jointed car–has five joints giving driver great flexibility to manoeuvre around tight spaces - driver only need a one metre radius to turn. The joints also enable the car to climb up steps!
- A road car/ bike –recognises the owner's voice so they can talk to the car using a wireless head set - can be told to change seating position which will turn the car into a bike
- A wind bike –main motor powered by four batteries, propellers powered by the wind

Key features of E4U:
- The E4U has an egg-shaped, streamlined body and is a new concept of future mobility for one person
- The name E4U embraces 4 Es; Egg, Evolution, Electricity and Eco-friendliness
- It is designed to be driven at low speeds on narrow roads in urban areas
- Both its speed and steering can be controlled with one electric motor in the hemisphere structure, which simplifies the system and makes it light
- A driver can control the pivot of the hemisphere structure, which spins in one direction
- Its speed and steering can be controlled depending on which direction he/she turns and how much he/she tilts the hemisphere
- Its rear legs can be folded, and the side parts are also detachable, which minimizes required parking space

About Hyundai Motor
Established in 1967, Hyundai Motor Co. has grown into the Hyundai Motor Group, with more than two dozen auto-related subsidiaries and affiliates. Hyundai Motor - which has seven manufacturing bases outside of South Korea including Brazil, China, the Czech Republic, India, Russia, Turkey and the U.S. - sold 4.4 million vehicles globally in 2012. Hyundai Motor, which employs over 90,000 worldwide, offers a full line-up of products including small to large passenger vehicles, SUVs and commercial vehicles.

Further information about Hyundai Motor and its products is available at www.worldwide.hyundai.com and www.hyundaiglobalnews.com.

About Hyundai Motor Europe
The company designs, engineers and manufactures cars in Europe, specifically for European consumers. In 2012, Hyundai achieved European sales of 444.000 units, taking a new-car market share of 3,5%. Almost 95% of the vehicles Hyundai sells in the region are designed, engineered and tested in Europe. And more than 70% are built at its two local factories (Czech Republic and Turkey), including New Generation i30, which is shortlisted for Europe's 2013 Car of the Year award. Hyundai sells cars in 28 European countries across 2.500 outlets.

About Hyundai Motor UK
Hyundai is the first Korean car manufacturer to make it in to the top ten best-selling manufacturers in the UK, an 11 place improvement since 2008. All passenger cars come with Hyundai's industry-leading 5 Year Triple Care package. Further information about Hyundai and its products is available at www.hyundai.co.uk