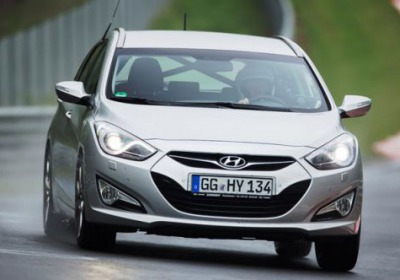 Anyone who's anyone among automakers tests at the Nürburgring, and the latest to join them is Hyundai. After fifteen months of construction and a €6.6-million investment – just shy of $9M USD – the Korean automaker has finally completed its new trackside testing center that was initially announced back in January.

Hyundai's new European Test Centre encompasses nearly 40,000 square feet of floor space on four levels in a glass and steel building that houses workshops, offices and hospitality areas. Acting as an extension of the company's European R&D center in Rüsselsheim, Germany, the new Nürburgring test center will allow Hyundai to conduct more regular and rigorous testing around the 73 corners and 13 miles of tarmac that make up the famous racetrack – definitely a good thing for a powerhouse brand that still sometimes fumbles when it comes to the dark arts of suspension and steering tuning.

HYUNDAI MOTOR READY TO RAMP UP TESTING AT NÜRBURGRING

Hyundai Motor has officially opened its brand new European Test Centre at the Nürburgring in Germany, the company's latest investment in its regional infrastructure. An opening ceremony marked the completion of the €6,62 million purpose-built vehicle testing facility, boosting the brand's R&D operations in Europe.

The company's new test centre provides it with a full-time presence at the iconic Nürburgring circuit, allowing it to further evaluate and develop the durability and driving dynamics of its vehicles more effectively and more often.

Construction of the striking 3,622m2 Hyundai European Test Centre began in June 2012 and was completed in less than 15 months. The unique glass and steel building houses workshops, office spaces and hospitality areas over four floors. The Nürburgring facility is an extension of Hyundai's European R&D centre in Rüsselsheim, Germany, where the brand's European design and engineering teams have been based since 2003.

Hyundai's accelerated durability tests are conducted from the European Test Centre. Each car taking part in the tests laps the Nürburgring 480 times in both dry and wet conditions, simulating over 100,000 miles of rigorous driving in less than six weeks.

Throughout each lap, data parameters are continually monitored, assessing steering input and vehicle course, suspension movement and ride and handling characteristics. The results are given directly to the vehicle development team based at the circuit, enabling Hyundai's engineers to quickly make changes and tailor cars' characteristics to the demands of European drivers.

Allan Rushforth, Senior Vice President and COO of Hyundai Motor Europe commented: "The Nürburgring is a unique challenge for any vehicle, so it is the perfect location for our new facility. The new European Test Centre is a natural extension of our Technical Centre in Rüsselsheim, and enables Hyundai Motor to more quickly and more accurately test the reliability and drivability of our vehicles. The emotional appeal of being 'tested at Nürburgring' will also help to further build the brand's reputation across Europe."

The Nürburgring is widely recognised as one of the most challenging tracks in the world, with 73 corners – 33 left and 40 right –spread across 12.8 miles of tarmac. With a difference in height of almost 300 metres between the lowest and the highest points, it features uphill and downhill gradients of 11 and 17 per cent respectively.