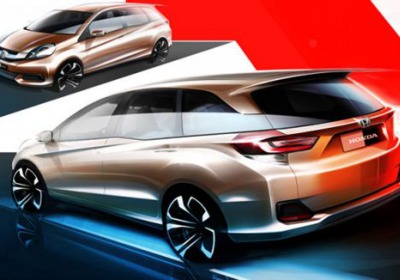 In preparation for the Indonesia International Motor Show coming up in September, Honda has released a teaser sketch (click to enlarge) of a new three-row MPV – specifically designed for this region – set to debut at the show. Honda says this yet-to-be-named people mover will be positioned in the entry-level MPV segment, which it says is a crucial part of the Indonesian auto market.

While there is no way to tell the size of the vehicle based off this rendering, it does appear to be far more stylish than the Honda CR-V, although the stepped-down beltline and the pinched shape of the rear quarter window have us thinking that Honda designers have been staring at the BMW i3 a little bit too much. The New Honda MPV will be powered by a 1.5-liter gas engine, and it goes on sale (and production) in Indonesia early next year. Honda has released a short press release for the new model, which is posted below.

JAKARTA, Indonesia, July 19, 2013 - P.T. Honda Prospect Motor (HPM) released the global premiere of the official sketch of the brand-new Honda MPV that will be making its world debut at the upcoming 21st Indonesia International Motor Show, scheduled for September 19-29, in Jakarta, Indonesia.

The new Honda MPV was developed for the Asian market by Honda R&D Asia Pacific Co., Ltd. in Thailand and P.T. Honda R&D Indonesia. This model will be the first Honda product in Indonesia to be introduced to the entry level MPV segment, the biggest category in the Indonesian automobile market. In addition to offering seven seats in a 3-row configuration, the new Honda MPV features an innovative design, spacious cabin, and advanced safety which is already a hallmark of every Honda product. The new Honda MPV will be powered by a 1.5L gasoline engine, which provides both sporty performance and good fuel efficiency.

Comment by Tomoki Uchida, President Director of P.T. Honda Prospect Motor
"The new Honda MPV has been developed especially for the needs of customers and road characteristics in Indonesia. This model will also be locally produced in Indonesia as the first product of its new Second Plant in Karawang, scheduled to begin operation in early 2014. This makes the new Honda MPV a very special product for Honda in Indonesia."