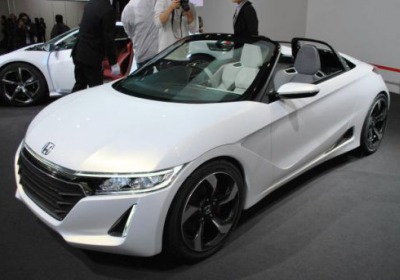 Apart from a tiny, one-paragraph mention in a press release about the Honda show stand in general, the company hasn't said very much about its completely charming S660 Concept. The model would seem very much to be a look ahead at a possible successor to the Beat kei car for Japanese customers, though we've been told that we shouldn't expect any kind of translation or product for the American market (despite certain key executives wanting more sports cars in the US).

Honda tells us only that the S660 roadster features "advanced styling" and "new initiatives such as Super cockpit interior." We do think that the confines of the S660 look particularly driver-focused, with a carbon fiber steering wheel clad in soft leather, very racy looking vented seats and instruments tilted to keep the pilot constantly informed.

Honda President and CEO, Takanobu Ito, also touched on the S660 in his remarks at the press conference, saying that the model "embodies the freewheeling thinking of young Honda engineers, who want to make a cool car that is unique to Honda." Takanobu also said that the concept will be developed into a production model for 2015, which is great news for Japanese drivers.

Find the very brief mention of the S660 in Honda's press release below, as well as the excerpted remarks from the CEO relevant to the car.

At this motor show, with the booth concept of "Live Outside the Box," Honda will propose its original mobility products generated from Honda's innovative inspirations unbound by precedent or conventional wisdom. Models on display include the Honda S660 CONCEPT, an open-top sports-type mini-vehicle, the NSX CONCEPT, the next-generation super sports model and the all-new UNI-CUB, a personal mobility device developed under the theme of "harmony with people."

Moreover, at the automobile section, Honda will exhibit the world premiere of the N-WGN, the 4th model of the N Series of mini-vehicles, as well as the world premiere of the planned production model of the second model of the Global Compact Series which is based on the URBAN SUV CONCEPT, unveiled at the 2013 North American International Auto Show in January of this year. This model will be officially announced in Japan in December of this year. In addition, a number of mass-production models also will be on display including the highly acclaimed all-new Accord Plug-in Hybrid and Fit equipped with Earth Dreams Technology, Honda's new-generation powertrain technologies which realize both the fun of driving and excellent fuel economy at a high level.

Also on display at the motorcycle section will be a number of models including several planned production models such as the Dunk, a new style 50 cc scooter equipped with a newly-developed liquid-cooled engine and the CB1300 SUPER BOL D'OR whose attractiveness was further enhanced through the adoption of LED headlights and a 6-speed transmission.

Covering the largest floor area of any single brand at the show, the Honda booth will showcase a diverse lineup of products unique to Honda.

Striving to realize the joy and freedom of mobility and a sustainable society where people can enjoy life, Honda will continue taking on new challenges to create new mobility and continue offering dream-inspiring products for its customers.

[Automobiles]
Honda S660 CONCEPT: The next-generation open-top sports-type mini-vehicle that features a dynamic and advanced styling design as well as various new initiatives such as a Super cockpit interior that thoroughly pursues the ultimate space for the driver.

(Excerpted remarks about the S660 Concept):

"And now, Honda will realize a mid-ship sports model in the small car segment as well.

This model embodies the freewheeling thinking of young Honda engineers, who want to make a cool car that is unique to Honda. Our engineers are devoting their passion and technologies to the development of this model toward the start of mass-production in 2015."