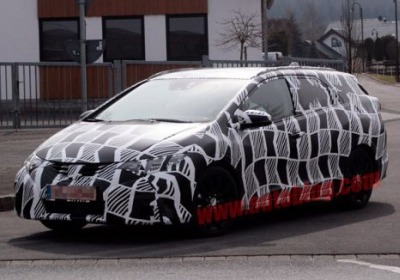 Honda showed off its Civic Tourer concept at the Geneva Motor Show in March, and at that time, we were told that a production version would be coming to market in the very near future. Obviously, the sleek lines of the concept car will be dumbed down slightly for consumers, but that doesn't mean the Civic wagon will be a bland machine. The Euro-spec Civic's angular front end looks like it will blend nicely with the rakish rump that we saw on the concept.

Our sources suggest that not only will the Civic Tourer be a class-leader in terms of cargo capacity, but it will likely be a pretty engaging car from behind the wheel, as well. Honda is hoping that the Tourer will account for roughly 20 percent of all European Civic sales after it goes on sale.

Expect to see the production car debut at the Frankfurt Motor Show this September, with the first customers taking delivery in early 2014. In the meantime, have a look at the camouflaged swoopy wagon from all angles in our gallery above.