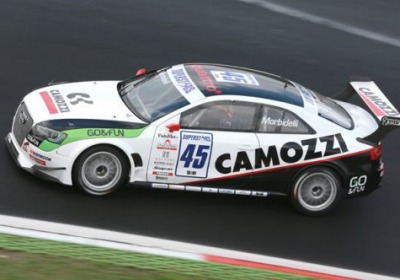 Despite his win at the Japanese Grand Prix this weekend, Sebastian Vettel still has another race or two to go before he can claim his fourth consecutive World Championship in Formula 1. Back in Europe, however, this weekend saw several championship titles decided in a variety of tin-top racing series.

In the British Touring Car Championship, Gordon Shedden won the final round at Brands Hatch this weekend, but that wasn't enough to defend his title. Instead, the ultimate glory went to Andrew Jordan, also driving a Honda Civic, coming in ninth place to take a seven-point victory over Shedden in the final standings. Little wonder then that Honda took the constructors' championship and the Honda Yuasa Racing team took the teams' title. Four-time BTCC champion and Fifth Gear co-host Jason Plato, now driving for MG, landed third in the standings.

While Honda dominated the British championship, it was Audi that reigned supreme in mainland Europe. In the Superstars International Series – Italy's touring-car championship – Gianni Morbidelli drove the Audi RS5 to his fifth title, finishing the season's final race in a calculated third place behind the BMW racecars of Giovanni Berton and Max Mugelli. It's the second consecutive win for the RS5 in the Superstars series (Johan Kristoffersson won the title last year), and the second this year following Mike Rockenfeller's title in the RS5 DTM.

As if that wasn't enough cause for celebration in the Audi paddock, Thomas Schöffler also drove his R8 LMS to the title in the GT Sprint International Series, the Italian sportscar championship that runs in parallel to the Superstars touring car series. And at the same time, another R8 LMS – driven by Anthony Kumpen, Bert Longin and Maarten Makelberge – narrowly took the trophy in the Belgian Racing Car Championship. It was the third title the R8 LMS has taken in Belgium (following its victories in 2009 and 2010) and the victory capped a weekend packed full of celebrations for Audi Motorsport, whose announcements you can find below.

Gianni Morbidelli won his fifth title in the Superstars International Series. The Italian former Formula 1 driver in his Audi RS 5 fielded by Audi Sport Italia only needed third place in the first race to crown himself early at the season finale in front of a home crowd at Vallelunga. Following the title win of the RS 5 DTM with Mike Rockenfeller in the DTM, thanks to Morbidelli, a production-based version of the RS 5 has prevailed in a motorsport championship in 2013 as well. Last year, Johan Kristoffersson had won the Superstars in the RS 5 already.

Thomas Schöffler converted his large advantage in the GT Sprint International Series into the title win in the season's finale at Vallelunga. The German, who was assisted in the title hunt in the Audi R8 LMS of Team MTM by his Swedish colleague Johan Kristoffersson, only required an eighth and a ninth place. After eight race weekends, Schöffler has collected 226 points on his tally and thus has 28 more than his closest rival.

The suspense could hardly be topped. In a genuine thriller, Anthony Kumpen, Bert Longin and Maarten Makelberge clinched the title in the Belgian Racing Car Championship (BRCC). The Belgian trio in its Audi R8 LMS of the PK Carsport team had started the season's final round as the leaders of the standings (208 points). Their advantage over their immediate rivals was merely five and twelve points, respectively. In the three-hour race at the Zolder circuit, the Audi made up one position after starting from third on the grid and finished in second place. The two teams on their heels in the standings took positions one and three. The results provided a razor-thin margin for the title win. After 2009 and 2010, an Audi R8 LMS has now won the title in Belgian GT racing for the third time.

See also: Don't hold your breath for an Audi RS8, 2014 Honda Accord Hybrid [w/video], Honda next to open museum to Google Street View.