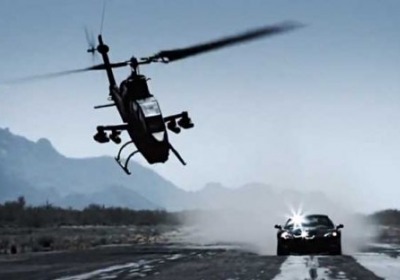 The formula of Top Gear Korea is seemingly about the same as it is everywhere else in the world, including the flagship British original: involve interesting cars in fantastical situations with charismatic hosts. That prescription has proved to be pretty reliable over the years, and has lead to some truly memorable and exciting pieces of television.

Something like that was undoubtedly what the Korean producers were after when they lined up this segment – a drag race between a Chevrolet Corvette ZR1 and an AH1 Cobra military helicopter. The planners almost certainly did not expect the filming of the segment to go quite as wrong as it actually did, with the helicopter actually crashing into the dirt after the "drag race" had been completed. Thankfully, we're told that no one was seriously injured in the crash, but the footage, in the video below, is pretty damn chilling to watch, nevertheless.