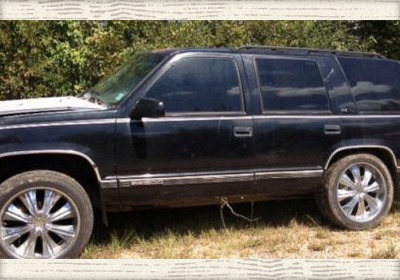 A stolen-vehicle case opened back in March was recently solved with the help of a property owner using Google Earth, a virtual globe and mapping service similar to Google Maps, ABC News reports. The man, who remains anonymous, found the stolen GMC Yukon while he was surveying his property in George County, Mississippi, using the map service and, judging by the top-down satellite image, thought he found a "shooting house" on his hunting grounds.

When he drove out to the suspicious structure, he realized it actually was a sport utility vehicle wedged in thick brush about 70 yards from the nearest road, so he called the police.

Law enforcement officers had arrested a female suspect in the case earlier based on eyewitness accounts, but didn't prosecute her because the stolen SUV hadn't been found. Ben Brown, a lieutenant detective with the George County Sheriff's Department, says that he ran the plates and confirmed the SUV was the stolen vehicle the department had been looking for.

"Now that we have the truck, we can pursue the prosecution," Brown says.

Watch the video below for the full story (followed by an interesting piece on the iPhone's fingerprint recognition system), and remember: Google is watching you...