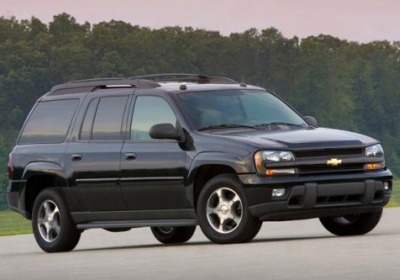 Back in August, the National Highway Traffic Safety Administration announced a recall on the General Motors GMT360 SUVs (Buick Rainier, Chevrolet Trailblazer, GMC Envoy, Isuzu Ascender and Saab 9-7X) ranging from the 2005 to 2007 model years and the 2006 GMT370 SUVs (Chevrolet Trailblazer EXT and GMC Envoy XL) due to potential fires associated with the driver's door module. Initially limited to 250,000 units sold or registered in 20 Snow Belt states (and the District of Columbia), the recall has now been expanded to include an additional 193,000 of these SUVs in the US and, according to The Detroit News, 40,000 more sold outside the US, including Canada and Mexico.

Like the original recall, the issue is still a faulty driver's door module that can short out, which could lead to a fire. The Detroit News is reporting that, out of the 443,000 units being recalled, GM says that there were 58 fires that caused 11 minor injuries, and the expanded recall accounted for six fires and one injury. Despite the lower number of fires, the recall notice recommends that owners park their vehicles until the recall repairs has been performed.

On recalled units with functional modules, the repair consists of a protective coating being applied to the module, while vehicles with modules that are not working properly will have the driver's door module replaced. The official recall notice is posted below, and it includes contact information for customers of all five brands.

SUMMARY:
General Motors (GM) is recalling certain model year 2006 Chevrolet Trailblazer EXT and GMC Envoy XL and 2006-2007 Chevrolet Trailblazer, GMC Envoy, Buick Rainier, SAAB 9-7x, and Isuzu Ascender vehicles. Fluid may enter the driver's door module, causing corrosion that could result in a short in the circuit board. A short may cause the power door lock and power window switches to function intermittently or become inoperative. The short may also cause overheating, which could melt components of the door module, producing odor, smoke, or a fire.

CONSEQUENCE:
A short in the circuit board could lead to a fire, increasing the risk of personal injury. A fire could occur even while the vehicle is not in use. As a precaution, owners are advised to park outside until the remedy has been made.