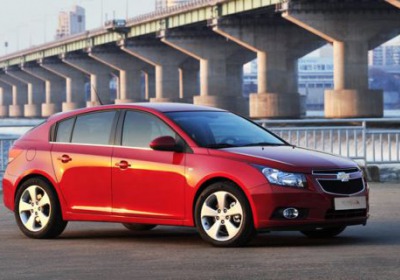 We've spoken at length previously about the fallacy of poor hatchback sales in the US, and with the runaway success of its Chevrolet Cruze sedan, it's somewhat unsurprising to hear that General Motors is rethinking its decision not to sell an overseas five-door variant in North America as it looks to plug a number of holes in its lineup. GM North American President Mark Reuss admitted during a media luncheon this week that not offering the model "... was a pre-bankruptcy planning mistake," says Forbes. With the next-generation model already well-along in development, it's likely that the current Cruze hatch (shown above) won't see US dealers.

In what must have been a far-reaching conversation, Reuss hinted at a number of new products for many GM brands, including "a much more beautiful Panamera" range-topper for Buick (which sounds a bit like the line of reasoning the TriShield brand has been pursuing with its Riviera concepts) and a "Ford Transit Connect-fighter" to supplant the recently announced badge-engineered Chevy City Express from Nissan.

Interestingly, Reuss also talked about a take on "a contemporary wagon for mainstream America," although a brand for such a vehicle was apparently not mentioned. While a compelling idea around the Autoblog watercooler, we can't help but note that US automakers have made attempts at rebirth of the family truckster with limited success – the Ford Flex has come in for critical acclaim but tepid sales, and the Chrysler Pacifica didn't find favor with pundits or consumers. Even so, the latter failure apparently isn't stopping Chrysler from a possible second attempt at the genre – it's said to be working on a next-generation Town & Country or Dodge Caravan that toes the line between a minivan and a crossover, so perhaps GM wouldn't be playing alone.

Finally, with the Chevy Silverado and GMC Sierra printing money (GM's full-size pickups are said to account for as much as two-thirds of its overall profits), it's unsurprising to hear Reuss talk about the possibility of a new truck occupying the sliver of white space between a heavy-duty pickup and a medium-duty commercial vehicle.