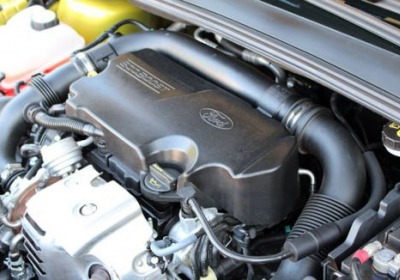 For the second year in a row, Ford has taken top honors in International Engine of the Year voting. As was the case last year, it is Ford's 1.0-liter EcoBoost engine that earns the automaker the accolade, achieving the highest-ever accumulated score in the 15 years that the award has been handed out.

A panel of 87 automotive journalists from 35 countries are responsible for choosing the world's best engines, and this is only the third time an automaker has managed back-to-back victories. Voters were impressed by the "Baby EcoBoost" engine's power output – 123 horsepower between 1,400 and 4,500 rpm, 148 pound-feet of torque from 1,400 to 4,000 rpm – and its compact size; Ford has demonstrated that the package is small enough to fit in the overhead bin of a passenger airplane.

Currently, the 1.0-liter EcoBoost is offered in the European Fiesta, B-MAX, Focus, C-MAX and Grand C-MAX, and Ford plans to put the engine in the Transit Connect, Transit Courier, Tourneo Connect, Tourneo Courier, Mondeo and EcoSport in short order. In North America, the Fiesta will be the first vehicle to offer the 1.0L EcoBoost later this year.

Perhaps it's not surprising to hear that Ford is increasing production of the little engine that could at its factory in Cologne, Germany to meet demand. Feel free to click on the above right infographic to enlarge, and scroll down for the complete press release from Ford.

UPDATE: Other category winners listed below.

Ford 1.0-litre EcoBoost engine wins "International Engine of the Year" for the second consecutive year
Turbo-charged, direct-injection three-cylinder engine achieves highest score in the 15-year history of the awards
Ford to double production of the 1.0-litre EcoBoost at its Cologne (Germany) Engine Plant from mid-August to meet demand

In Europe, the 1.0-litre EcoBoost is available in Fiesta, B-MAX, Focus, C-MAX and Grand C-MAX; it also will be offered in the Transit Connect, Transit Courier, Tourneo Connect, Tourneo Courier, Mondeo and EcoSport

The 1.0-litre EcoBoost – which combines direct fuel injection, turbocharging and variable valve timing to lower fuel consumption without sacrificing power – received the highest score in the history of the awards. The engine also won the "Best Engine Under 1.0-litre" category at the annual awards presented by Engine Technology International magazine.

Ford also confirmed plans to double production of the engine at its Cologne (Germany) Engine Plant to more than 1,000 engines a day from mid-August to meet demand.

"With a technology as mature as the internal combustion engine, it's very rare to achieve a true breakthrough, but that is exactly what the team accomplished with this engine," said Joe Bakaj, Ford vice president, Global Powertrain. "You have to drive it to believe a small three-cylinder engine can deliver such performance and fuel economy."

A panel of 87 automotive journalists from 35 countries around the world judged the awards on drivability, performance, economy, refinement and the successful application of advanced engine technology. Ford is one of three car makers to record back-to-back victories in the 15-year history of the awards. The Ford 1.0-litre EcoBoost also has won the International Paul Pietsch Award 2013 for technological innovation at German magazine Auto Motor und Sport Best Cars Awards and the Dewar Trophy from the Royal Automobile Club in Great Britain, a Breakthrough Award from Popular Mechanics magazine in the U.S.

"Who'd have believed it? A 1.0-litre engine that has it all, powerful, fuel efficient, clean and lightweight," said Peter Lyon, U.K. juror and freelance journalist. "This is a masterpiece."

The 1.0-litre EcoBoost was designed at Ford's research and development centres in Aachen and Merkenich, Germany, and Dunton, U.K., and is built in Cologne and Craiova, Romania.

Dean Slavnich, co-chairman of the 15th International Engine of the Year awards and editor of Engine Technology International Magazine, said: "Baby EcoBoost – Ford's first-ever three-cylinder design – is still the engine to beat across the board. It's economical in real-world conditions while the compact turbo helps ensure that the entire package can power larger vehicles like the Grand C-MAX with ease."

The engine is being rolled out throughout the world. It is now available for customers buying the new EcoSport in India and China and later this year will be offered with Fiesta in North America.

Small enough to fit in the overhead luggage compartment of an airplane, the engine delivers best in class petrol fuel economy for Europe in such vehicles as Fiesta, Focus, C-MAX and Grand C-MAX.

New "cold testing" technology was also introduced, allowing engines to be tested without being started – reducing fuel usage and CO2 emissions from the process by 66 per cent. All remaining energy required to run the plant comes from renewable sources, including three hydro-power plants in Norway and Sweden.

Ford of Europe plans to triple annual production of vehicles equipped with fuel-efficient EcoBoost petrol engines to approximately 480,000 by 2015, from 141,000 in 2011. The company projects that more than 300,000 of those vehicles will be equipped with the 1.0-litre EcoBoost. In the first quarter of 2013 in Europe, the 1.0-litre EcoBoost engine accounted for 42 per cent of orders in B-MAX, 30 per cent in Focus and 24 per cent in Fiesta across Ford's 19 traditional European markets.

*All fuel consumption and CO2 emissions figures in g/km are from officially approved tests in accordance with EC Directive 93/116/EC. Fuel economy figures quoted are based on the European Fuel Economy Directive EU 80/1268/EEC and will differ from fuel economy drive cycle results in other regions of the world.