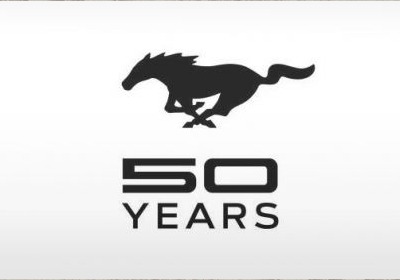 The Ford Mustang turns 50 years old this year, and this is the logo that will announce the milestone occasion on a special line of merchandise. The graphic is the result of an internal design competition, and Ford will give 50 different companies the license to use it on traditional logo merchandise like shirts and watches, along with some untraditional items like pinball machines.

Ford is going to begin the celebrations at this week's New York Auto Show and continue them throughout the year, but April 17 is the official birthday of the the pony car that just won't quit. You can expect to start seeing anniversary merchandise in the next couple of weeks.

Celebrating its centennial this year, Union, N.J.-based Schott NYC was one of the first manufacturers to sign on for the 50 Years licensing program, designing a one-off Mustang jacket to commemorate the occasion

NEW YORK, March 26, 2013 – The Ford Mustang will soon become the newest member of a very exclusive club – vehicles in continuous production for 50 years. To help mark this milestone, 50 companies will sell products including watches, T-shirts, model cars and more that celebrate the Mustang's first 50 years.

"During its first 49 years of production, Mustang has come to evoke a variety of emotions in our customers – freedom, independence and being true to one's self – just to name a few," said John Nens, Ford's team lead for Global Brand Licensing. "We're marking this Mustang milestone with a distinctive collection of licensed products from select manufacturers that will carry the unique Mustang 50 Years logo."

All of the new merchandise will be easily identified with a custom logo that celebrates 50 years of Mustang.

The logo was crafted by Ford designer Michael Thomson. It features the Mustang's trademark galloping pony in silhouette over the characters "50 YEARS." This new icon has a clean and sophisticated appearance in either white on black or black on white. Only 50 companies will be licensed to create products bearing this special logo including high-quality die cast models, videogames, watches and apparel.

"We're working closely with our licensees to ensure every item reflects the unique qualities of Mustang," said Nens. "Like the car itself, we want our licensed products to convey an attitude of strength, passion and the highest quality."

Over upcoming weeks and months, other Ford licensees will reveal a variety of Mustang products featuring the Mustang 50 Years logo to mark this special moment in automotive history and kick off the next 50 years of Mustang.

From the Tuskegee Airmen to 50 Years of Mustang

Celebrating its centennial this year, Union, N.J.-based Schott NYC was one of the first manufacturers to sign on for the 50 Years licensing program. Irving and Jack Schott established their company the same year Ford began producing the Model T on the first moving assembly line. Great-grandson and COO Jason Schott runs the family business today, along with his mother Roz Schott, president, and his uncle, Steven L. Colin, CEO, producing premium jackets, shirts and accessories.

During World War II, Schott NYC dedicated its entire capacity to making sheepskin bomber jackets, leather flight jackets and peacoats for American soldiers, sailors and pilots fighting overseas. Among those who went into battle in Schott jackets were the pilots of the 332nd Fighter Group, better known as the Tuskegee Airmen.

"I can't think of a better partner with whom to celebrate our 100th anniversary," said Jason Schott. "We are honored to collaborate with an iconic family business that shares our commitment to domestic production."

While the Ford Mustang is classically identified with the wild horse of the American West, it was actually named for the famed North American P-51 fighter plane, the preferred mount of the Tuskegee Airmen in the final year of the war.

Over the next half-century, the Schott Perfecto leather jacket figured prominently in iconic images of Marlon Brando, James Dean, Peter Fonda, the Ramones and Bruce Springsteen. Today Jay-Z, Lady Gaga and Adam Levine can all be spotted in Schott jackets.

"The Mustang attitude of freedom and mobility is universal and enduring, and fans around the world will be honoring that heritage with numerous celebrations as we move forward," said Steve Ling, Ford Car Marketing manager.