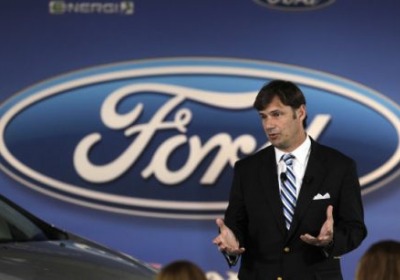 Ford marketing head honcho Jim Farley made waves at CES this week by telling show attendees, "We know everyone who breaks the law, we know when you're doing it." according to a report by Business Insider. Farley continued by saying, "We have GPS in your car, so we know what you're doing. By the way, we don't supply that data to anyone."

Farley has since amended his statement, saying that Ford dose not, in fact, track its customers in their cars "without their approval or consent."

Apparently carried away with a hypothetical notion, Farley was attempting to describe how Ford might be able to employee aggregated user data for things like accurate traffic reporting and pattern spotting. A Ford spokesperson confirmed with Business Insider that its GPS units are not sharing the whereabouts of drivers, though there are a few on-board services that might do so. After opting in to the services (and presumably being made aware of any/all tracking and data collection), Ford's Sync Services Directions and Crew Chief software do, in fact, allow data collection as a means of improving both systems. Farley added that the opt-in data is not shared, even when being tracked.