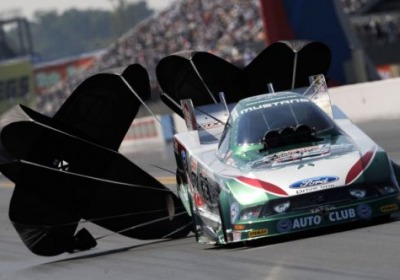 As the smallest team in the sport, it wasn't really a surprise when Dodge decided to pull out of NASCAR, but Autoweek is reporting that Ford is looking to pull the plug on its professional-level NHRA sponsorships following the 2014 season. With attendance and television ratings down, the article reports that Ford is just backing out of the top series but will remain active in the Sportsman classes of racing, which are geared more toward the grassroots and semi-professional racers.

This means that one of drag racing's biggest names, John Force, will be left looking for new sponsorship after next season. Force, 64, has been with Ford for 17 years, winning 15 championships in that time and winning almost half of all Funny Car events in his Mustang since he started working with Ford in 1997, but after 2014, there could be some big shakeups at John Force Racing.

According to the report, Force would consider is moving over to the Top Fuel dragster series, although he could also move to another manufacturer to remain in the Funny Car series. With Ford on the way out, this leaves just Toyota and Dodge as the remaining active automakers in the highest levels of drag racing.