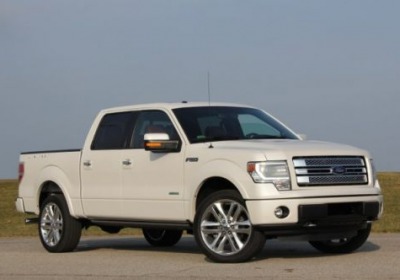 Ford is ready to call the ball on its 2013 sales totals, predicting a first-place finish for units sold in the US for a single brand. The company anticipates selling more than 2.4 million vehicles when all vehicle sales over the last 12 months have been tallied, repeating the victory it trumpeted over Toyota last year.

According to Ford's accounting, it sold 329,677 more vehicles than did Toyota in 2012. This year, the Blue Oval expects that margin to grow; through the end of November, Ford says it has outsold Toyota by 396,041 units.

Retail sales of Ford products are projected to exceed 1.7 million units for 2013 (the best retail result in 6 years for the company), with passenger cars accounting for 600k of that total. The redesigned Fusion is expected to crest the 290k mark, and the Fiesta is said to be ready to hit a model-record of 70k-plus. Meanwhile, utility vehicles and trucks are still paying a lot of bills in Dearborn, with the new Escape racking up an expected 300k sales and F-Series trucks chugging along at 688,810 units sold thru November.

The full Ford press release, replete with more chest-thumping sales figures, can be found below.

- 2013 retail sales up 15 percent year-to-date, as share grows across entire Ford lineup of cars, utilities, trucks and electrified vehicles
- Strong growth driven by western and southeastern regions of United States
- Ford brand expects to sell more than 2.4 million vehicles for 2013
- Ford brand sales lead through November increases to 396,041 units over second-place Toyota brand
- With more than 2.4 million vehicles sold, Ford expects to retain its title as best-selling vehicle brand in the United States in 2013, and has widened its lead over Toyota.

"The great news is that we are not overly reliant on any one segment – we're seeing double-digit sales growth in cars, trucks and utilities," said John Felice, vice president, U.S. marketing, sales and service. "The Ford brand has had more retail share growth than any other brand in the country, with our most significant gains coming from import-dominated coastal markets. With 16 launches next year, we're looking to keep our sales momentum going."

For the full year in 2012, the Ford brand lead over Toyota totaled 329,677 vehicles. While December sales are not finalized, Ford expects that number to grow substantially. Through November, Ford's lead over Toyota has widened to 396,041 vehicles.


Growth in all segments
Ford Fiesta set a new sales record in 2013, with a projected 70,000-plus vehicles sold, while Ford Fusion had its best year ever, with sales expected to exceed 290,000 vehicles.

Ford is the best-selling utility brand for the third straight year, outselling the second-place brand by more than 30 percent. Sales of Ford utility vehicles are up 10.3 percent, to 621,652 units. Ford Escape leads this increase; Escape is projected to sell more than 300,000 units – its best-ever year since launching in 1999. Ford Explorer is up about 15 percent, and is expected to be the best-selling midsize utility vehicle in the United States for 2013. This will be the best year for Ford utility vehicle sales since 2004.

An improved U.S. economy and an increase in home construction starts have helped boost Ford F-Series pickup to another sales crown as the nation's best-selling truck for 37 straight years. With 688,810 sales through November, F-Series will be the overall best-selling vehicle in America for the 32nd year.