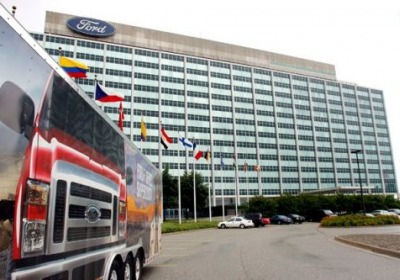 As predicted, Ford has reported that its first quarter of 2013 was a resounding success overall, with a pretax profit of $2.1 billion ($0.41 per share), and a net income of $1.6 billion ($0.40 per share). In fact, Ford made a pretax profit of some $2.4 billion in its home North American market, with that total number being pulled down by losses in South America and Europe. That gaudy North American profit is the strongest result by the automaker since 2000.

Ford's companywide profit for Q1 was down $147 million from one year ago, while the net income number marked an increase of $215 million year over year. Overall, this is Ford's 15th-consecutive profitable quarter.

The bad news from the European market was even worst in Q1 2013 than it was last year. Pretax losses of $462 million – on revenue of $6.7 billion – represented a year-over-year change of -$313 million. In South American, the company reported a loss of $218 million, down from a slim profit of $54 million in Q1 2012. The news was better for Ford Asia Pacific Africa, where a $6 million pretax profit in 2013 showed a year-over-year gain of some $101 million when compared to losses in 2012. Scroll down to read Ford's full press release.

Strong total company pre-tax profit was $2.1 billion, or 41 cents per share, a decrease of $147 million from a year ago; 15th consecutive quarter of profitability

Net income was $1.6 billion, or 40 cents per share, an increase of $215 million compared with a year ago

Positive Automotive operating-related cash flow was $700 million for the quarter - the 12th consecutive quarter of positive cash flow - with strong liquidity of $34.5 billion, unchanged from year-end 2012

Wholesale volume and total company revenue each grew about 10 percent compared with a year ago, including market share gains in North America and Asia Pacific Africa

North America pre-tax profit was a record $2.4 billion - the highest quarterly profit since at least 2000, when the company began reflecting the region as a separate business unit - with an operating margin of 11 percent. Ford also reported a small pre-tax profit for Asia Pacific Africa, and losses in Europe and South America

For full year 2013, the company's guidance remains unchanged - Ford expects another strong year, with total company pre-tax profit about equal to 2012, operating margin about equal to or lower than 2012, and Automotive operating-related cash flow higher than 2012
Financial Results Summary +

As part of Ford's previously announced strategy to de-risk its pension obligations, the company made $1.8 billion in cash contributions to its worldwide funded plans during the quarter. This included $1.2 billion of discretionary contributions, in line with Ford's long-term pension de-risking strategy.

Dividends paid in the quarter totaled about $400 million.

"Our strong first quarter results provide further proof that our One Ford plan continues to deliver," said Alan Mulally, Ford president and CEO. "Our plan remains centered on serving customers in all markets around the world with a full family of vehicles - small, medium and large; cars, utilities and trucks - each with the very best quality, fuel efficiency, safety, smart design and value."


For the first quarter of 2013, Ford's wholesale volume and revenue were each about 10 percent higher than a year ago, driven primarily by strong performance in North America and Asia Pacific Africa.

The decrease in total Automotive pre-tax profit and operating margin for the first quarter is explained by Europe and South America.


Ford North America experienced strong growth in the first quarter, with wholesale volume up 17 percent from the same period a year ago, and revenue improving 20 percent.

Ford North America's pre-tax profit, which was a record for any quarter since at least 2000 when the company began reflecting the region as a separate business unit, increased from the same period a year ago due to favorable market factors, offset partially by higher costs that reflect the company's investment in new products and growth, as well as higher pension and OPEB expense. These same factors drove Ford North America's operating margin of 11 percent - the fourth quarter out of the last five that the region produced double-digit operating margins.

For full year 2013, Ford's guidance for North America remains unchanged - the company expects strong performance to continue, with pre-tax profit expected to be higher than 2012 and operating margin of about 10 percent.


The decrease in Ford South America's pre-tax results and operating margin in the first quarter was more than explained by unfavorable exchange, most of which related to Venezuela, including the impact of the devaluation of the bolivar. Currency weakening in Argentina was also a factor.

For full year 2013, the company's guidance remains unchanged, with Ford South America expected to be about breakeven. The external environment is uncertain, however, particularly in Venezuela and Argentina. There is a risk that this could adversely affect the company's ability to deliver full year breakeven results for the region.

"We continue to implement our One Ford plan in South America to address the challenging business environment in the region," said Bob Shanks, Ford executive vice president and chief financial officer. "We are confident in the strength of our new global products and we are expanding our product portfolio while looking at all areas of our business to improve operating results."

The company's European transformation plan announced in October 2012 is proceeding on track, with solid progress made during the first quarter of 2013. Ford's unprecedented product acceleration is on pace, with five new passenger vehicles and two new commercial vehicles introduced since the plan was announced. These new vehicles are off to a strong sales start. The company increased retail market share for the five major markets in Western Europe, which is critical to margins, residuals and brand health, and made strides on quality and customer satisfaction.

Ford also made progress on cost efficiencies during the first quarter, including plans to restructure its manufacturing footprint within the region. The company's discussions are progressing with unions at Southampton assembly and Dagenham stamping and tooling operations in the U.K. toward closure mid-year. Discussions also are progressing at Ford's assembly plant in Genk, Belgium, where hourly employees recently ratified a package of proposed separation benefits, and salaried employees now have reached agreement on a tentative proposal subject to ratification. As the information and consultation process moves forward, normal vehicle production levels at the plant have resumed.

Full year 2013 guidance for Europe remains unchanged, with the company expecting a loss of about $2 billion. The outlook for the business environment in Europe remains uncertain. While it is possible that economic and industry conditions will begin to stabilize later this year, recent economic indicators are mixed. Despite the challenging environment, the company is progressing toward its goal of a profitable, growing Ford Europe by mid-decade.

The improvement in Ford Asia Pacific Africa's pre-tax results and operating margin mainly reflected favorable market factors, as well as higher royalties and subsidiary profits. These positive factors were largely offset by the company's investments for future growth in the region.

For full year 2013, the company's guidance for Ford Asia Pacific Africa remains unchanged at about breakeven. While Ford expects to deliver strong growth in volume, share and revenue during 2013, costs will continue to largely offset these positive effects as the company continues to invest in an expanded product lineup, new plants in China and India, and people to implement the company's growth plan.

Ford expects net interest expense for full year 2013 to be about $750 million to $800 million, in line with the first quarter run rate of about $200 million.

For full year 2013, Ford's guidance for Ford Credit remains unchanged. The company projects that Ford Credit's full year pre-tax profit will be about equal to 2012, year-end managed receivables will be in the range of $95 billion to $105 billion, and distributions to its parent will be about $200 million.


Ford's planning assumptions and key metrics include the following:


Consistent with prior guidance, the company expects its full year operating effective tax rate to be similar to 2012, which was 32 percent.

Ford remains focused on delivering the key aspects of the One Ford plan, which are unchanged:

• Aggressively restructuring to operate profitably at the current demand and changing model mix
• Accelerating the development of new products that customers want and value
• Financing the plan and improving the balance sheet
• Working together effectively as one team, leveraging Ford's global assets

The company continues to work toward its mid-decade outlook.

"We continue to expect 2013 to be another strong year, as we go further in strengthening our global product lineup and improving the competitiveness of our operations," Mulally said. "Everyone at Ford remains laser focused on continuing to make progress on our One Ford plan and building a profitably growing Ford for the benefit of all our stakeholders."