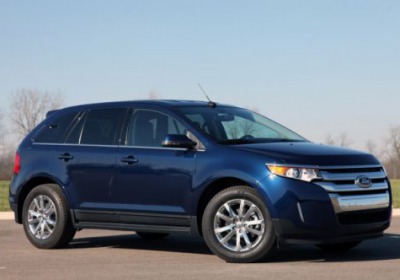 Ford announced that it's investing $682 million in its Oakville assembly plant in Ontario, Canada, to make it a global manufacturing plant, which the automaker also says secures 2,800 jobs there. Including this injection of cash, Ford has invested over $2 billion in Canada in the last decade, starting with nearly $1 billion for Oakville in 2004, and over $570 million for its Essex Engine Plant in 2010.

The move to make Oakville a global manufacturer of Ford vehicles means, "If consumers suddenly shift their buying habits, we can seamlessly change our production mix without having to idle a plant," says Joe Hinrichs, Ford's president of the Americas.

Ford says that the latest investment will help it meet North American demand for the Oakville-produced Edge crossover, which is on track this year to beat 2007's US sales record of 130,000 Edges. The Ford Flex and Lincoln MKX and MKT are also manufactured at the plant.

This all would be for naught if the automaker didn't use the resources it's bolstering, and Ford indeed says it will increase yearly spending on parts at the Canadian facility by $194 million, to nearly $4 billion annually.

Oakville's transformation to a global manufacturing plant has already started, and it's expected to be completed by the fall of 2014. For more information on Ford's recent investment in Canada, take a look at the press release below.

- Ford's C$700 million investment in Oakville Assembly secures 2,800 jobs, making it one of the most competitive and advanced global manufacturing plants in Canada
- Global manufacturing helps Ford meet increasing demand for its new, fuel-efficient vehicles in world markets
- Ford has now invested more than C$2 billion in Canada in less than a decade
- Spending on Canadian-made auto parts by Ford to increase approximately C$200 million a year, to a total of nearly C$4 billion annually

"This investment is helping us find much needed capacity for global products and securing jobs, and it is positioning Oakville as one of the most competitive and important facilities in the Ford system," said Joe Hinrichs, president of The Americas, speaking from a ceremony at the plant today. "Global fuel-efficient products, built in a state-of-the-art facility, by a great workforce are a win for everyone today."

Hinrichs said Ford will bring several new global models to the plant, helping to meet demand in North America and around the world by producing vehicles with best-in-class quality, fuel efficiency, smart design and value. He added that the company's investment will mean its spending on Canadian-made auto parts will increase by approximately C$200 million, to a total of nearly C$4 billion annually.

The enhancements at Oakville Assembly are Ford's latest step in maximizing its existing North American manufacturing assets, matching production to consumer demand as Ford's North American sales surge to pre-recession levels. Sales of the Oakville Assembly-produced Edge in the United States – Edge's biggest market – so far in 2013 are on pace to beat the prior record of 130,000 vehicles set in 2007.

The move to global manufacturing at the Oakville plant will enable Ford to shift production based on consumer demand more quickly and efficiently. The state-of-the-art facility will be able to align capacity of any one vehicle with real demand for Ford customers in North America and all over the world.

"If consumers suddenly shift their buying habits, we can seamlessly change our production mix without having to idle a plant," said Hinrichs. "Flexible manufacturing enables us to get vehicles to consumers faster than ever before. This is a great value proposition for everyone."

Ford currently utilizes nine global platforms around the world to build about 85 per cent of its vehicles. Global manufacturing offers Ford the opportunity to leverage commonality of components, design and build processes to streamline its ability to produce high-quality vehicles and accelerate production to meet growing consumer demand for Ford products.

"Ford's investment demonstrates Canada can be competitive in the global market through strategic partnerships," said Dianne Craig, president and CEO, Ford of Canada. "Working closely with government and labour, we have secured a bright future for our employees at Oakville Assembly."

As part of the investment, Ford will also be increasing its sustainability and fuel efficiency research and development capacity in Ontario, including supporting studies in vehicle light-weighting, the reduction of stationary emissions from industrial facilities, and research into advanced engine development at Ford's powertrain research facilities in Windsor.

Investment in auto manufacturing directly benefits the Canadian economy. It is estimated every auto job generates up to 10 supporting jobs.

Work on the transformation at Oakville Assembly is already under way. It is expected to be completed by fall 2014.

"This is an incredible year for Oakville Assembly," said Will Cowell, plant manager, Oakville Assembly. "We are celebrating the plant's 60th anniversary and we passed the one-million mark in Ford Edge production. We look forward to continuing to celebrate many more milestones and to building quality vehicles with passion and excellence for years to come."