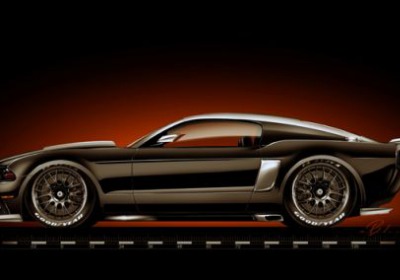 Ford always shows up in force at the SEMA Show, but this year's tally of 57 custom-tuned cars, trucks and vans is more than we can ever recall the Blue Oval bringing. Ford will introduce 28 of its project vehicles in its "Dreamcase" ahead of next month's show. The first batch of eight you'll find here with the remaining vehicles trickling into public view over the next couple of weeks.

This first group of cars includes a Fiesta, four Fiesta ST hatchbacks and a trio of Mustang show cars styled and tuned to varying degrees all by different aftermarket companies. Tanner Foust, Nitto Tire, 3dCarbon and Ice Nine Group are some of the more familiar names affixed to these cars. Our favorite so far is the Hollywood Hot Rods Mustang convertible (shown above) with its removable aluminum top and methanol-injected, 750-horsepower 5.0-liter V8.

Scroll down for all the details on these Fiestas and Mustangs, and stay tuned for more info on Ford's SEMA line, which will include custom versions of the Focus ST, Fusion, Transit Connect, F-150 and Super Duty.

-Ford launches Dreamcase, an online vehicle display previewing 28 of the 57 vehicles the company will showcase at the 2013 SEMA show next month in Las Vegas
-Ford is bringing "Vandemonium" to SEMA, with 10 customized Transit Connect Wagons and Transit Connect cargo vans
-Special guest Gene Simmons of KISS and his wife, actress Shannon Tweed, will unveil a customized 1956 F100 hot rod on the Ford stand for a Nov. 5 event at 1 p.m.

Ford will highlight its rich history of longtime relationships with aftermarket tuners at the 2013 SEMA show, taking over more than 27,000 square feet inside Las Vegas Convention Center Nov. 5-8. Ford will also occupy more than 110,000 square feet of the convention center's Silver Lot, where company-sponsored racing schools from Miller Motorsports Park will take center stage in "Ford Out Front."

The Ford exhibit will feature modified versions of Ford's most popular models, including Fiesta, Focus, Fusion, Mustang, F-150 and Super Duty. Ford and its aftermarket modifiers will also highlight what's possible when the European styling of Transit Connect Wagon and Transit Connect cargo van is mixed with the creativity of the industry's top builders and customizers – "Vandemonium" will be the result.

Ford will also host a press event at its stand at 1 p.m. on Tuesday, Nov. 5, inside Las Vegas Convention Center. In addition to the announcements Ford has planned, special guest Gene Simmons of KISS and his wife, actress Shannon Tweed, will reveal a 1956 F100 truck to be featured in a charity auction, with proceeds going toward funds for a new children's hospital near Tweed's hometown in Saskatchewan, Canada.

Ford at SEMA highlights
Race fans will have plenty to talk about and see as Ford Racing makes an exciting major announcement about its 2014 racing program.

Ford's indoor exhibit will be home to "Vandemonium" – 10 Transit Connect Wagons and cargo vans treated as blank canvas by aftermarket tuners to illustrate the vehicle's use beyond family or commercial transportation. The modifications go beyond eye-catching custom paint or new fascia. The builders incorporated a functionality that captures the spirit of Transit Connect, including creating a mobile boutique, working bike shop and a portable two-person gaming lounge. Look for the first custom Transit Connects to be previewed in Dreamcase this Tuesday, Oct. 22.

Ford will offer race fans at SEMA the opportunity to be among the first to play Xbox One's "Forza Motorsport 5," which goes on Nov. 22 of this year. Enthusiasts can take the new Ford Fiesta ST for a virtual spin at the exclusive Xbox One demo stations on the show floor, including the custom designed 2014 Fiesta ST MRT Xbox show car.

At the "Ford Out Front" display outside of the convention center, attendees will see how Ford takes customers further on the road, off the road and on the track. Media will have the chance to ride in Rallycross Fiestas driven by Ken Block and Tanner Foust. Fans will also get in on the action, with ride sessions offered for the Fiesta ST and F-150 SVT Raptor used at Ford-sponsored racing schools.

2013 FORD SEMA DREAMCASE
Ford goes further on and off the track for SEMA 2013, with the show's most exciting project vehicles from the industry's top builders. Check back frequently, through Nov. 1, as we unveil even more thrilling Ford project vehicles. Click here to download renderings and descriptions of this year's extreme #FordSEMA builds. Collect them all.

3dCarbon/Air Design body kit with front air dam, splitter, side skirts, rear lower diffuser and rear upper hatch spoiler
19-inch Pinzette-M Forgiato wheels with Pirelli tires (215/35/R19)
Pecca Leather red-and-black two-tone interior with contrast stitching
This 2014 Ford Fiesta by 3dCarbon makes a bold statement with road-hugging curves and race-inspired styling. Using a body kit, 3dCarbon modified the Fiesta by giving it an aggressively sculpted front air dam with splitter, aerodynamic side skirts and a rear lower diffuser accented with black trim. Designed for the sport compact enthusiast, this 3dCarbon Fiesta is intended to be an amalgamation of European road touring car and American muscle car. The company began making body kits for the 2010 Fiesta, said Ernie Bunnell, vice president of sales and marketing for 3dCarbon. The intent has been to create a European-influenced body kit resulting in a more aggressive look that isn't too over the top, he said.

Ice Nine Group designed fender flares, carbon fiber hood, rear wing, moonroof plug with room vent and carbon fiber quarter window plugs with duct vents for added cooling in the cabin
W2 Graphic Specialists provided full vinyl wrap and special window tinting
17-inch BRAID wheels with Falken Azenis RT615K tires (215/40/R17)
The Ice Nine Group has turned this Ford Fiesta ST into a vehicle that could be the ultimate weapon for any choice of roadway. The inspiration for this modified Fiesta ST is a full-on race car for alternative forms of motorsports, according to Keith Strong, president of Ice Nine Group. Working with rally racing driver Tim O'Neil, the team created a vehicle that has a road racing and global rally flavor. Ice Nine Group was also able to use a number of new custom carbon fiber products for the body to help create a beautiful vehicle suited for paved or gravel roads.

Multiple upgrades to the powertrain including high-performance, stainless steel Eco-Flow exhaust system and COBB Tuning induction and cooler for optimum inlet airflow
Sherwin-Williams custom two-tone paint applied by MRT
H&R Special Springs coilover suspension, Steeda Autosports adjustable panhard bar and performance brakes
This 2014 Ford Fiesta ST by MRT takes a stylish street performer out of the digital realm and into the real world. The Fiesta ST, which will be featured in the upcoming "Forza Motorsport 5" video game for Xbox One, has a custom two-tone paint job that mixes blazing green and deep black, with bright red accents. It also has performance stance and sound, with a modified chassis and powertrain that provides a strong balance to its eye-catching appearance. The Forza Motorsport 5 Fiesta is intended to build a bridge between automotive enthusiasts and gamers, creating a vehicle that is literally a transition from the game to the real world, said Scott Hoag, CEO of MRT. "What you see in the game is what you will experience on the road," Hoag said.

LGE*CTS Motorsports custom digital camouflage paint and carbon hood from Ice Nine Group
Interior features COBB Tuning/Tanner Foust Racing shift knob, embroidered floor mats and headrests
KICKER audio system
Stand and salute this 2014 Ford Fiesta ST, which has been transformed into a tribute to the U.S. armed forces in a partnership that includes COBB Tuning and Tanner Foust Racing, to raise awareness for the Pat Tillman Foundation. COBB Tuning led the build on the vehicle, which is covered in an urban military digital camouflage and packed with custom powertrain modifications including a full three-inch turbo exhaust and cold air intake. The decision to create a military-inspired Fiesta is part of COBB Tuning's continued support of U.S. military personnel and the Pat Tillman Foundation, which provides resources and educational scholarship support for veterans, active service members and their spouses. This COBB Tuning/Tanner Foust Racing Fiesta ST will tour military bases throughout 2014 following the SEMA show.

"As a lifelong Ford fan, I was inspired to create this project car when I realized Ford doesn't offer yellow on the 2014 Mustang," said Brian Ellis, sales, marketing and social media manager for AirPower Group at Vortech. "We wanted to create something really eye-popping with a mechanical package to match the appearance."

The team at Vortech added 3dCarbon's Boy Racer kit, along with a carbon-fiber cowl induction hood and other carbon accents from TruFiber all finished in a custom paint supplied by DuPont.

Under the carbon-fiber hood sits the potent 5.0-liter Coyote V8 engine topped off with a Vortech V-3 Si supercharging system packing 605 horsepower and 473 lb.-ft. with 7.5 psi of boost.

Features a hand-formed aluminum removable roof
5.0-liter V8 puts out an estimated 750 horsepower
Incorporates a Banks Straight-Shot Water-Methanol injection system with IQ Man Machine interface
Like a middleweight who decides to challenge a heavyweight in the ring, Hollywood Hot Rods decided to take on the supercars with its 2014 Ford Mustang GT convertible at SEMA 2013. While the classic style and proportions of Mustang say performance even in stock form, the team at Hollywood Hot Rods wanted to create something truly unique with this project car.

"We really wanted to take the customization of this Mustang to the next level," said Troy Ladd, owner of Hollywood Hot Rods. "Instead of simply adding accessories and a custom paint job, we wanted to really change the car.

"So we decided to redesign some key elements of the car, like the roof and rear section; to create a completely new and bold design that propels Mustang into supercar status while retaining classic Mustang DNA."

More than 150 hours of went into reshaping the entire rear section of the Mustang project car in metal. Another 250 hours of hand-forming went into crafting the aluminum lift-off roof. All body modifications including the front splitter, side scoops, skirts and diffuser are custom fabricated in aluminum.

This Hollywood Hot Rods Mustang has the mechanical credentials to back up its looks, with a Ford Racing Whipple supercharger and Banks Straight-Shot Water-Methanol injection system with IQ Man Machine interface, bringing the 5.0-liter V8 to an estimated 750 horsepower. Underneath, a Cortex Racing X-treme grip track suspension system keeps the tires planted so all that power can be put to use.

The muscular body is finished in custom BASF R-M Onyx Race Red paint with jet black stripes and that matches the red Wilwood brake calipers. A fiery look like this needs plenty of "go" to accompany the "show," and this pony delivers.