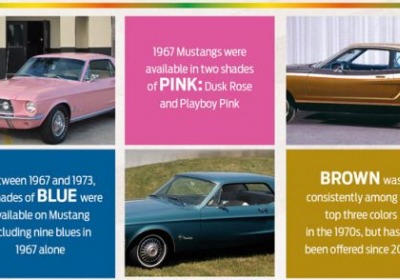 Preparing to celebrate its 50th birthday, the Ford Mustang has seen a lot of vehicle trends come and go, and this especially goes for paint colors. Using historical production data, Ford has managed to create an infographic dating back to 1967 that breaks down the three top Mustang colors for each year as well as calling out some of the more interesting trends and colors over the years.

Over its five generations, the Mustang has been offered in a seemingly endless rainbow – from Playboy Pink in '67 and color-changing Mystichrome on the 2004 Cobra – but the most popular has always been red, which is the color of choice for 21 percent of all Mustangs ever made. Almost every year since 1967, red has been among the top three colors for the Mustang, but other popular colors have included blue, white, brown and, most recently, black. There are even websites and registries available for people owning certain-color Mustangs.

As the all-new 2015 Mustang gets ready for its debut later this year, there's no telling what kind of exciting and/or wacky colors Ford has in store. Click on the image above to see the full infographic (choose the "large" option for optimal viewing), or check it out in a smaller size along with the press release posted below.

-Ford Mustang exterior paint color popularity shifts from the top-selling green and blue in the 1960s to best-selling black and red today
-Red has been consistently popular throughout Mustang's history and is the top seller overall, adorning about 21 percent of all Mustangs
-The past 50 years of Mustang have brought eye-catching, special-edition colors like Mystichrome, Playboy Pink and Gotta Have It Green to the road
-Exterior paint colors help bond Mustang owners to create clubs dedicated not only to the car but to specific colors

The world has changed dramatically in the past 50 years and the favored color choices of Ford Mustang drivers have shifted as well. As television transitioned from black-and-white to color, Mustang reflected the incoming fashion trends with a palate of vibrant colors.

In the five decades since, color shifts to more muted browns and yellows and back to today's bolder hues have given Mustang a different tint from many other cars.

While the best-selling vehicle color in the U.S. today is white, Mustang bucks the trend; just a mere 10 percent of Mustangs sold today are white.

Currently, black is the best-selling Mustang exterior paint color, up 10 percent over the last decade to account for 28 percent of all 2013 Mustangs sold. By comparison, only about 1.5 percent of customers between 1967 and 1973 went for black Mustangs according to historical production data provided by Marti Auto Works, the licensed supplier of Ford Motor Company production records.

Blue has made a comeback recently, after dominating the early years of Mustang, reaching a peak of 30 percent of all cars in 1968 when six different shades were offered. The availability of eye-catching shades like Grabber Blue and Kona Blue have helped that primary color capture as much as 23 percent of sales in recent years.

Other early favorites such as green, yellow and brown have largely faded away in the 21st century. Green and yellow have mostly been found on limited edition Mustangs like the Bullitt and Boss 302 while the last brown Mustangs were built in 1989.

In addition to the typical color palate, Mustang has been offered in a variety of specialty shades ranging from hot Playboy Pink in 1967 to color-shifting Mystichrome on the 2004 SVT Cobra to today's Gotta Have It Green. As a vehicle that first prided itself as "the car designed to be designed by you," Mustang has offered customers their pick of colors, packages and special editions to make Mustang their own.

"Our Mustang owners are passionate about their cars, and the exterior paint color they choose invokes an emotional response to the vehicle," said Melanie Banker, Ford Mustang marketing manager. "Mustang owners buy a vehicle in School Bus Yellow or Grabber Blue because it reflects what they want their Mustang to say to the world about them."

The passion that surrounds the Mustang brand and customer is punctuated by the color that wraps the exterior of the vehicle. For some owners, the Mustang paint color runs deeper than the paint on the shell of the vehicle – it helps create a bond between fellow Mustang owners who share the same passion for their cars.

The Yellow Mustang Registry is dedicated to the owners and enthusiasts of yellow Mustangs. Founded in 2001, the registry has more than 8,932 members and 8,984 registered vehicles worldwide, and has hosted more than 60 events since its founding. The yellow Mustangs in the registry range from early Springtime Yellow, offered 1965-66, to Zinc Yellow, introduced in 2000.

Similarly, AllRedMustangs.com devoted to "Ford Mustangs 1964-present – as long as it's red," has more than 1,300 members across 14 countries.

"Your car is an extension of you and embraces your personality," says Steve Schattem, president and owner, AllRedMustangs.com. "I think red has become more popular over the years since the Mustang became America's muscle car.

"Color registries are a great way to bring people with a commonality together. It's another way to share a common bond," says Schattem.