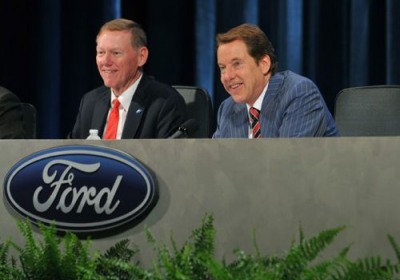 Ford Motor Company has a dual-class stock structure of Class A and Class B shares. The roughly three billion Class A shares are for the general public like you and me, while the roughly 71 million Class B shares are all owned by the Ford family. Each Class A share gets the shareholder one vote, each Class B share is worth 16 votes, the result being that Common Stock holders control about 60 percent of the company while the Ford family controls 40 percent even though it holds far fewer shares. The only way that could ever change would be if the Fords sell their Class B shares, but even so, Class B shares revert to Class A when sold outside the family, so they'd have to sell a whole bunch of them.

A contingent of Class A shareholders think the dual-class system is unfair, and for the past few years a vote's been held during the annual shareholders meeting to end it. It has failed every time, as it just did again during the meeting held this week. A smidge over 33 percent voted to end the dual system, outvoted by the 67 percent who are happy with the way Ford is going - unsurprising in view of a corporate turnaround that will be part of business-class curricula for years to come.

On the sidelines, Ford elected Ellen R. Marram to the post of independent director, the first woman to hold the job. The former Tropicana CEO and 20-year Ford board member replaces retiring board member Irvine Hockaday who helped bring Alan Mulally to the CEO position.