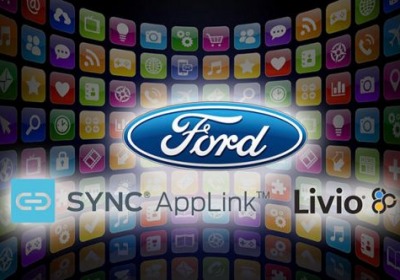 Ford Motor Company has announced the acquisition of Livio, a Ferndale, MI-based software development company best known for aftermarket in-car connectivity devices, but also as a supplier of technology for proprietary systems for automakers. Livio, co-founded by Sigal and Massimo Baldini, will be a wholly owned subsidiary of Ford Global Technologies.

"With the additional expertise Livio provides us, Ford intends to continue to lead the next generation of in-car connectivity with technology advancements that give consumers more options to access their devices on the go," said Paul Mascarenas, chief technical officer and vice president, Ford Research and Innovation, in a statement.

Ford is clearly trying to beef up its in-house tech capability around telematics and device connectivity. While the Blue Oval has been a leader in these areas with SYNC and MyFord Touch in terms of getting the systems into as many cars as possible, the execution of the applications have been criticized for glitches.

As AOL Autos reported last November, Consumer Reports announced the automaker had plunged in its annual reliability survey. Ford ranked 27th out of 28 car brands surveyed. It wasn't faulty engines or problematic drivetrains that sunk Ford's reputation, but rather problems with MyFord Touch and MyLincoln Touch, the touchscreen multimedia systems that keep drivers connected on the road.

Ford paid $10 million for Livio, which occupies a building hardly more than a store-front in the suburb of Ferndale, about sixteen miles from Ford's Dearborn headquarters. Ford is looking to Livio help it develop an industry standard for connectivity between smartphones and the dashboard of its vehicles. "At Livio, our philosophy is centered on bringing customers more connectivity with less hassle," said Livio CEO Jake Sigal in a press release. Have a look below for Ford's official announcement.

- Ford builds on in-car connectivity leadership by acquiring startup software development company Livio
- The deal allows the companies to share technologies, intellectual properties and engineering talent as they work toward creating an industry standard for in-car connectivity
- Industry standard would give app creators a single platform to work with, resulting in faster development of higher quality apps for consumers to safely access digital content on the go
- Ford has been the industry leader in in-car connectivity systems since the 2007 introduction of Ford SYNC®; by 2015, more than 14 million vehicles worldwide will be equipped with SYNC and 7 million with SYNC AppLink™, which lets drivers control mobile apps with their voice

DEARBORN, Mich., Sept. 26, 2013 – Ford today announced it will acquire Livio, a Ferndale, Mich.-based software development startup. The move will further extend Ford's ability to meet consumers' growing demand for safe, seamless access to the electronic content they love while in their vehicles.

Livio builds products and software tools to support smartphone/car connectivity and has a strong track record of creating in-car connectivity solutions. Ford's purchase of Livio is designed to accelerate innovation by providing access to each other's talented engineers and unique intellectual property, as well as enabling both companies to work toward developing an industry standard for smartphone-to-vehicle communications.

"With the additional expertise Livio provides us, Ford intends to continue to lead the next generation of in-car connectivity with technology advancements that give consumers more options to access their devices on the go," said Paul Mascarenas, chief technical officer and vice president, Ford Research and Innovation.

Ford and Livio are joining forces amid explosive growth in the connected car market. Last year, more than 1.9 million vehicles were delivered with smartphone integration solutions, such as Ford SYNC® AppLink™. That number is expected to reach 21 million vehicles by 2018, according to a June report from London-based GSMA, which represents the global mobile industry, and data from SBD, a London automotive technology consulting firm.

Livio's software-based, advanced vehicle information and entertainment solutions improve the connection between software and hardware. Now, they will help Ford standardize the way customers connect their smartphones to their vehicles.

Ford previously contributed Smart Device Link, the open source version of AppLink, to the GENIVI Alliance for use by app developers.

A single vehicle interface standard gives developers the opportunity to write software faster and more efficiently, providing customers the apps they want to use more quickly. Livio software already is compatible with several commonly used apps and works with all major smartphone devices.

"At Livio, our philosophy is centered on bringing customers more connectivity with less hassle," said LivioCEO Jake Sigal. "We believe this partnership is an excellent match, as it will give us the ability to work with Ford to provide customers even more access to new technologies in the vehicle infotainment space."

Livio, co-founded by Sigal and Massimo Baldini, will be a wholly owned subsidiary of Ford Global Technologies, which manages all aspects of intellectual property for Ford. Livio will function as a separate department within Ford Electrical/Electronic Systems Engineering, while integrated into Ford's overall connectivity operations. The deal gives Ford access to a broad group of application developers, while enabling Livio to maintain its independent and entrepreneurial approach.

"Ford is acquiring Livio to advance connectivity for our customers and to lead the way in in-vehicle connectivity for the entire automotive industry," said Bill Coughlin, president and CEO, Ford Global Technologies.

With its SYNC connectivity system and AppLink application programming interface, Ford was the first automaker in the world to launch an open developer program that enables software developers to directly interface with a vehicle and create apps to enhance the driving experience.

Since SYNC's debut in 2007, Ford has been the automotive leader in in-car connectivity systems. In 2011, Ford reached a milestone with production of the 3-millionth SYNC-equipped vehicle. By 2015, Ford will have more than 14 million vehicles on the road worldwide equipped with SYNC and 7 million with SYNC AppLink.

Consumer demand for robust in-vehicle connectivity is rising, as the technology and automotive worlds continue to intersect. Ford customers have opted for SYNC and MyFord Touch® on nearly 80 percent of 2013 Ford vehicles.