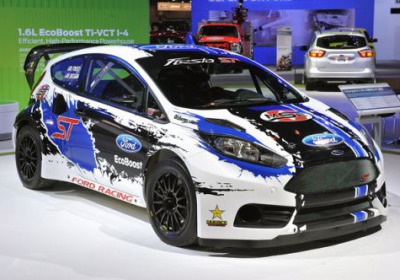 As we reported earlier, the Chicago showing of this plucky Ford Fiesta ST GRC racer points to bigger and brighter days for Global RallyCross. For the upcoming season, you can expect to see Ken Block and Tanner Foust both driving the Ford racecar, and if last season's results are any indication, you can anticipate quite a few podium appearances, as well.

The Fiesta seen here was built by the Swedes at OlsbergsMSE, and will be driven in anger by Foust in 2013. Modifications are, as you'd expect, extensive, and include an engine, exhaust and braking upgrades, a racing style short-throw shifter and a limited-slip differential. As you can see, the car has been fully stripped out and caged for maximum speed and safety, too.

Refresh your memories with the details of the car, in the press releases below. And if you head out to the Chicago Auto Show this year, don't forget to drop by the Ford stand to have a look.

- Sweep at Texas Motor Speedway with Gronholm, Foust and Deegan

- Silver and bronze at X Games with Block and Deegan

Fiesta ST is the result of the combined efforts of Team RS in Europe and SVT in the United States. Fiesta ST may be born with racing DNA, but buyers won't have to pay for that performance at the pump. Available exclusively as a five-door hatchback in North America and with a six-speed manual transmission, Fiesta ST is projected to achieve up to 34 mpg. A new high-output variant of the award-winning 1.6-liter EcoBoost® four-cylinder engine propels Fiesta ST with an estimated 197 horsepower and 214 lb.-ft. of torque. This compact performance machine sports a unique grille and chin spoiler with new rear diffuser and fascia extensions. Bright tipped dual-exhaust pipes and high-mount spoiler along with unique 17-inch wheels complete the visual package: Fiesta ST looks like it's made for the racetrack.

Ford Motor Company, a global automotive industry leader based in Dearborn, Mich., manufactures or distributes automobiles across six continents. With about 171,000 employees and 65 plants worldwide, the company's automotive brands include Ford and Lincoln. The company provides financial services through Ford Motor Credit Company. For more information regarding Ford and its products worldwide, please visit http://corporate.ford.com.

In addition to Ford Racing Performance Parts, components and partners from Ford Racing's Focus race programs globally have lent their expertise, including:

- With such a vast array of race-tested quality performance parts at its disposal, along with access to Ford Racing data, expertise and global strategic relationships, fifteen52 believes it has built what is possibly the ultimate all-around Focus ST with the TrackSTer.

fifteen52 was founded in 1996. Originally known for bringing high-end Euro accessories to the US VW/Audi market, they quickly branched out into the high performance world as well. Builder of many high-profile project cars such as the VWvortex.com chronicled Project X Mk4 Jetta coupe series, fifteen52 has consistently been on the cutting edge of the Euro aftermarket scene. In the late 2000s fifteen52 began manufacturing their own line of wheels, with their most famous model, the Tarmac, making its way onto Ken Block's HFHV Gymkhana FOUR and FIVE 650-hp Fiestas. By recently teaming up with Ford Racing and Ken Block for Project ST, fifteen52 is set to expand its reach even further into the automotive aftermarket scene. To learn more about these projects, and follow their progress, check out www.fifteen52projectST.com.